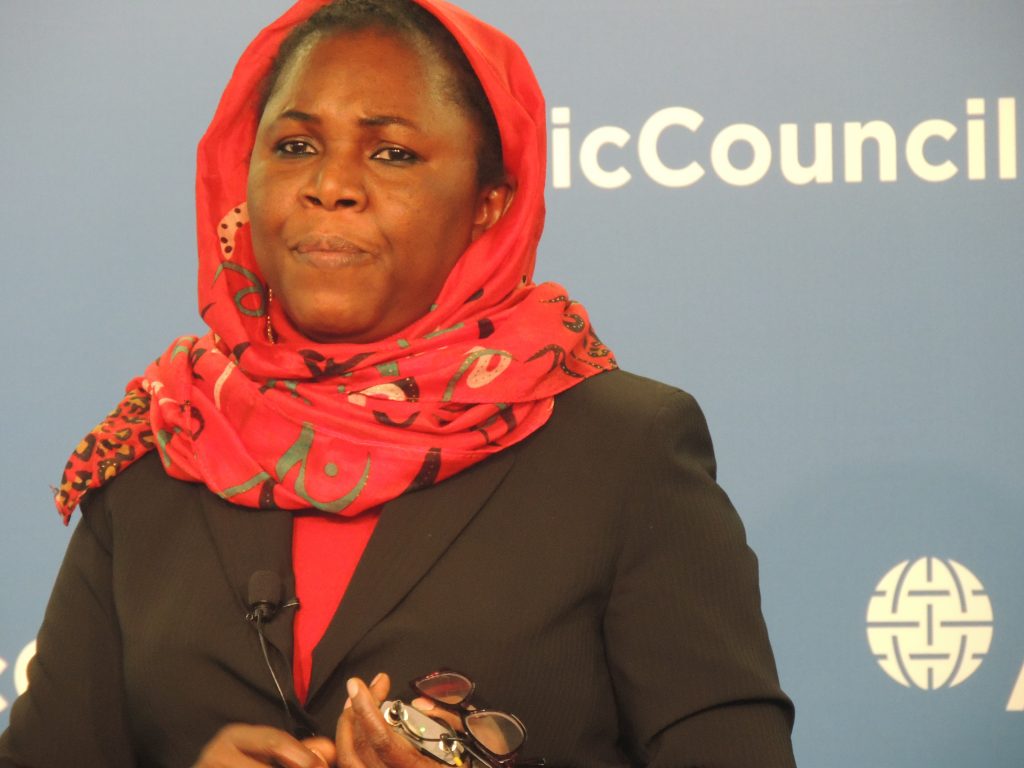 On November 7, 2016, the Atlantic Council’s Rafik Hariri Center for the Middle East hosted a panel discussion on the relationship between Islamic law and human rights. Geneive Abdo, director of the Atlantic Council’s Islamic Law and Human Rights initiative, moderated the panel with legal scholars Dr. Moataz El Fegiery, Protection Coordinator for the Middle East and North Africa with Front Line Defenders, and Mrs. Hauwa Ibrahim, lawyer and professor affiliated with the Harvard Divinity School. Ambassador Frederic C. Hof, director of the Hariri Center, introduced the topic and the panelists.

The Atlantic Council’s Islamic Law and Human Rights initiative, a project of the Rafik Hariri Center for the Middle East, explores human rights violations by Arab states and non-state actors allegedly committed in the name of Islam. It is funded with a generous grant from the Carnegie Corporation of New York. The event presented an overview of the initiative and featured a discussion on where gender relations and freedom of speech stand in the context of Islamic law in Arab societies.

Dr. El Fegiery discussed two different approaches he sees to understanding and practice of sharia, or Islamic law, stressing that the compatibility between sharia and human rights depends on contextual and external factors as much as on who is implementing policy.

As such, the two major trends of sharia—traditionalist and transformative—differ significantly. The former is more rigid and the latter more flexible. Still, both trends, according to Dr. El Fegiery, present different sets of challenges, such as censorship.

According to Dr. El Fegiery, questions of human rights compatibility with sharia have become more pressing after the Arab uprisings, with the increased political role played by Islamist parties. Along the same lines, Dr. El Fegiery rejected the idea of a unitary Islamist body, and insisted that despite their similarities, Islamist parties in the region behave in different ways, with some being more progressive while others exacerbating tensions.

In her discussion, Mrs. Ibrahim shared her first-hand observations of the practice of sharia in Nigeria, and offered a broader understanding of sharia in the Muslim world.

Mrs. Ibrahim stated that sharia and human rights are compatible when human dignity is respected. She argued that more importance should be given to textual interpretation of sharia because loopholes can be found to ease harsh sentences. This is particularly the case with stoning women in the case of adultery. Moreover, Mrs. Ibrahim argued that the role of judges is as critical as providing proper religious education and training for governmental bodies.

Finally, all of the panelists agreed on the importance of inclusion, dialogue between the implementing bodies and societies with diverging views, and on the need to establish safeguards in order to positively influence policy making at the regional and international levels.

Image: Mrs. Hauwa Ibrahim, lawyer and professor affiliated with the Harvard Divinity School, during her remarks at the Atlantic Council’s “Is Islamic Law Compatible with Human Rights?”