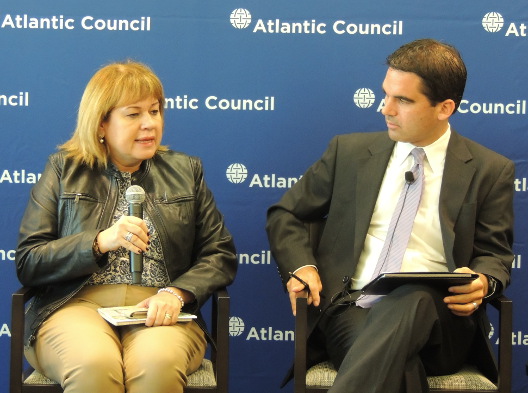 On October 29, 2013, the Adrienne Arsht Latin America Center and Freedom House hosted a conversation with three Venezuelan human rights activists on the state of democracy and freedom in Venezuela.

Context
Six months after a highly contentious presidential election, Venezuela’s political, economic, and social future is more uncertain than ever. President Nicolás Maduro recently asked for the power to rule by decree to further limit the few remaining checks on executive power. The resulting proposal, an “Enabling Law,” is aimed at fighting corruption, but if approved would give Maduro a wide range of new powers to go after his critics, including political parties. At the same time, inflation reached 49 percent in September, and scarcity of basic products and speculation on the timing for a potential devaluation continue to afflict average Venezuelans. Blaming the United States for the country’s economic crisis, Maduro recently expelled three American diplomats. This move was followed by the creation of a commission in the National Assembly to investigate human rights organizations funded from abroad.

Some of the main issues discussed at the panel included President Maduro’s proposed enabling law, ongoing restrictions on civil rights, the role of NGOs, and the responsibilities of the international community.

Although enabling laws have been common in Venezuela since the 1970s, having been used by every administration, including four times by former President Hugo Chávez, Maduro’s draft is disconcerting in its lack of limitations. The panel emphasized how this was particularly the case in the context of the government’s  use of the military in domestic  affairs. The recent Secure Homeland Initiative, a new police tactic that brings military units into violent neighborhoods, is a recent example in that it blurs the line between federal and municipal authority to the advantage of the executive. Although the law is aimed at fighting corruption, panelists fear that it would reduce the autonomy of both governors and mayors to contest government initiatives, and further restrict the ability of localities to influence governance through the legislature.

The panel also emphasized the collapse of the state as a mediator of social grievances, signifying an increasing inability to resolve local conflicts. With economic deterioration and a drop in standards of living, this weakness has contributed to an increase in violence as well as an outbreak of social unrest.

The erosion of civil rights protections has particularly affected journalism. The Maduro government uses the legal system, including regulations on financing and defamation, to intimidate and tame reporters and media outlets. Controlling the media has allowed President Maduro to manipulate how new social movements are perceived – for example, trying to continue his predecessor’s narrative of a Bolivarian rebellion against a foreign-financed bourgeoisie.

Panelists noted that no alternatives exist for improving social conditions without winning at the ballot box, which is why there is a continued focus on encouraging social movements and finding a path to an opposition victory in elections.

Panelists identified the need for political solutions to be led by Venezuelan society, arguing that the visibility of US influence hampers potential avenues for opposition success. One panelist noted that even beyond electoral success, it is imperative to encourage dialogue between the opposition and the ruling coalition to reverse the gradual closing of Venezuelan society. Developing a stronger partnership with Brazil, an influential player in Venezuela, will also be instrumental going forward.