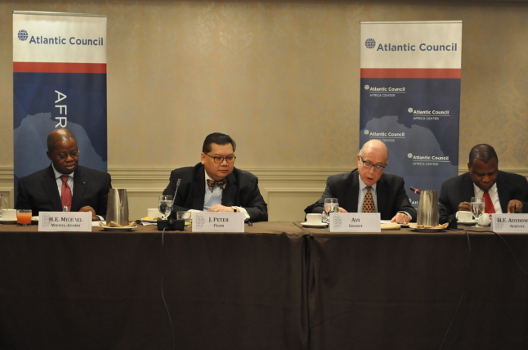 Israel has been active in Africa for decades, but now more than ever the country’s growing economy, burgeoning population, and military and security expertise make it an attractive partner for African nations.

On Wednesday, March 4, the Atlantic Council’s Africa Center hosted a roundtable discussion with Ambassador Avi Granot, Deputy Director General and Head of the Africa Division in Israel’s Ministry of Foreign Affairs. The discussion was moderated by Africa Center Director J. Peter Pham, and centered on the bumpy past and bright future of Israeli interests and investments on the continent.

In 1973, Israel had 27 embassies in Africa, but these were closed overnight and the diplomats expelled under pressure from the Arab League following Israel’s victory over the Arab armies that launched a surprise attack on Yom Kippur. It took Israel decades to re-engage with African nations, and the country still has rocky relations with the African Union after the withdrawal of Israeli observer status at the behest of the late Libyan dictator Muammar Gaddafi. In recent years, however, Israeli entrepreneurs have flocked to Africa, and in 2014 alone, more than 50 African heads of state and senior ministers reciprocated with official visits intended to promote trade, security cooperation, and civil society. Ambassador Granot noted that Israeli engagement with Africa has been driven by the desire to promote economic growth on the continent, and – while Israel faces existential threats from Islamic extremists in Africa – security objectives remain secondary considerations.

During the question and answer session that followed his prepared remarks, Granot underscored the opportunity and need for greater cooperation between Israel, the United States, and African nations, and reaffirmed his country’s commitment to continue working as a partner with Africa in development, security, and economic initiatives.