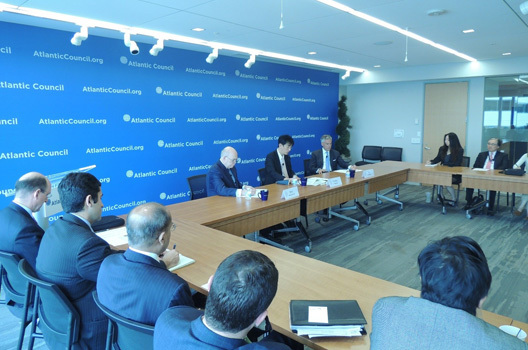 On April 15, Atlantic Council’s Asia Security Initiative in the Brent Scowcroft Center on International Security hosted an off-the-record discussion on “Japan’s Priorities in Shaping the Future of the Asia-Pacific Economic Order.” The roundtable featured Tatsuo Yamasaki, the Japanese Vice Minister of Finance, with welcoming remarks from Jon M. Huntsman Jr., the Chairman of the Atlantic Council. The panel was moderated by Olin Wethington, Nonresident Senior Fellow of the Brent Scowcroft Center.

The focus of the discussion was on the need for the US and Japan to evaluate the type of institutional architecture and governance arrangement that is in the common interest of the region, and how to chart the roads there. The importance of values such as freedom, democracy, human rights, and the rule of law in Japan’s foreign policy and the development of global society was emphasized throughout the event. Specifically for international finance and economic policy-making, however, it is the balance of newly emerging powers and existing institutions that is vital to development. Existing institutions with experiences and the core values aforementioned need to effectively adapt to, engage, and work with the new powers. The emerging countries in turn, are expected to play more responsible roles in these institutions.