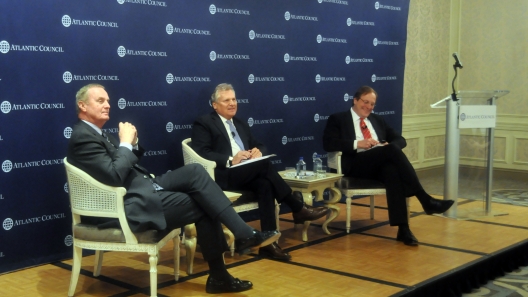 An Atlantic Council International Advisory Board member and the leader who brought Poland into the European Union and NATO, President Kwasniewski remains active in shaping Europe’s future. He is the co-chair, along with former European Parliament President Pat Cox, of the European Union’s effort to monitor the legal proceedings against former Ukrainian Prime Minister Yulia Tymoshenko. His remarks focused on the situation in Ukraine.

General Jones, now chairman of the Council’s Brent Socwcroft Center on International Security, focused on Europe’s energy policies, specifically regarding shale gas, and what recent developments could mean for Europe as a whole. During the Q&A, Jones commented that the Obama Administration regrets usage of the term “pivot towards Asia” and how it relates to the transatlantic alliance (clip below).

Launched in 2009 in partnership with the government of Poland, this lecture series pays tribute to one of the great figures of the Solidarity movement in Poland, a courageous leader who was among the most crucial advisers to Lech Walesa during the Gdansk shipyard strikes and beyond. He did much through his intellect, wisdom, and engagement to end the Cold War’s division of Europe and served a democratic Poland as foreign minister, among other key positions.

Photos from the event