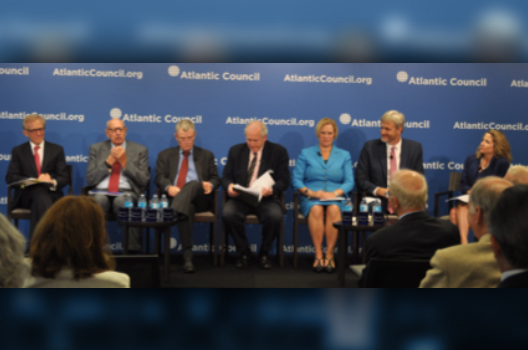 In this follow-up to the Atlantic Council’s 2016 report on reforming the National Security Council, a team of respected and experienced authors led by former Ambassadors Thomas Pickering, Chester Crocker, and David Miller examined the inner workings of the US Department of State in order to find ways to improve the department’s performance quickly and for little if any cost. The report spells out five key areas where the State Department needs improvement: structure and process, personnel, budget, congressional relations, and the US Agency for International Development (USAID).

On September 6, the Brent Scowcroft Center on International Security’s Foresight, Strategy, and Risks Initiative (FSR) hosted a launch event for the State Department Reform Report. The event featured a keynote address from Rep. Ed Royce (R-CA), chairman of the House Foreign Affairs Committee, and a panel with the report’s authors moderated by Washington Post columnist David Ignatius. Chairman Royce stressed the importance of the State Department as the country’s “most important foreign policy institution,” and expressed his admiration for the department’s Foreign Service Officers (FSOs). The panel of authors then elaborated on several of their proposals, including the need for more dedicated training for FSOs, better mutual understanding between the State Department and Congress, and improvements to the independence and effectiveness of USAID.