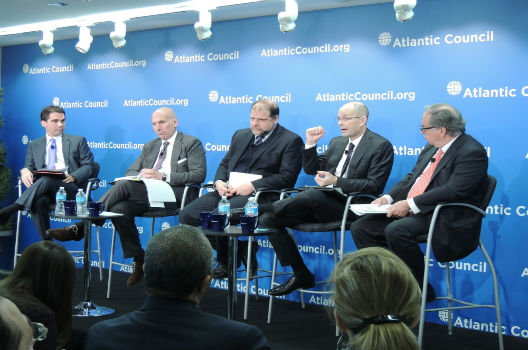 On February 5, key US administration, Congressional, and other leaders joined the Atlantic Council to discuss how the Trans-Pacific Partnership (TPP) could be a game-changer for both the United States and its partners across the hemisphere. Congressman Dave Reichert opened the session with his first public address of 2015 on the trade agenda, followed by a discussion with Under Secretary of Commerce for International Trade Stefan Selig, Ambassador of Chile to the United States Juan Gabriel Valdés, FedEx Managing Director of Trade and International Affairs Ralph Carter, and the Financial Times’ World Trade Editor Shawn Donnan. The event was co-hosted by the Council’s Adrienne Arsht Latin America Center and the Global Business and Economics Program, presented in partnership with Bank of Tokyo Mitsubishi-UFJ, a member of MUFG, a global financial group.

In dialogue with Rock Creek Global Advisors’ Managing Director and former Deputy National Security Advisor Daniel Price, Representative Reichert (R-WA) said that Congressional legislation, known as Trade Promotion Authority or TPA, “is a critical, absolutely critical component” to concluding TPP negotiations and future trade agreements. “It [a finalized TPP agreement] is going to be soon is what we’re hoping for,” noted Reichert, who characterized recent discussions between President Obama and the Export Council, as well as between other Congressional leaders, as “upbeat and hopeful.” Reichert, a senior member of the House Ways and Means Committee and Co-Chair of the Friends of TPP Caucus, outlined the benefits of the Trans-Pacific Partnership, emphasizing that “the number one priority” for the trade agenda “is creating jobs by selling American products. Forty percent of the jobs in Washington state are directly related to trade,” said Reichert of his home state, and TPP would help create jobs selling products overseas.

The subsequent panel discussion between Under Secretary Selig, Ambassador Valdés, Donnan, and Carter explored in-depth aspects of TPP, the Transatlantic Trade and Investment Partnership (TTIP), and the effects that trade agreements can have on small businesses and exporters.

Under Secretary Selig announced that the US set record exports for 2014 and that US exports to countries with free-trade agreements (FTAs) grew at double the pace of those countries without an FTA. “TPP will be a best-in-class trade agreement,” said Selig, “set for the 21st century and set for an economy that is wildly different than when NAFTA and other trade agreements were conceptualized and signed into law.” Ambassador Valdés explained that US-Chile trade already enjoys “100 percent free trade” with zero tariffs, but he underlined that TPP has the potential to “complement and improve” existing trade by addressing new areas of non-tariff barriers, regulatory matters, and encouraging trade in services. Moreover, an advanced TPP would help establish global gold standards for labor and environmental regulations, as well as define the rules of the road for state-owned enterprises and the protection of intellectual property rights.

Carter emphasized how trade agreements like TPP benefit small and medium-sized businesses. “Exporting makes companies stronger by creating more opportunity,” Carter said, pointing to how the rise of the Internet and e-commerce can quickly and easily connect companies to clients across the globe. He noted that while very few SMEs currently export, those that do pay their workers higher wages, are more likely to stay in business, and are growing a lot faster than their competitors who focus only on their domestic market.

Donnan framed the US trade agenda in a broader global economic and political context. “One of the key points about TPP and the other mega-regional agreements [like] TTIP . . . is that multilateral trade negotiations are frozen and have been frozen for some time now. We used to talk about a ‘noodle bowl’ of bilateral trade agreements; I’d like to patent the phrase the ‘ravioli plate’, where these mega-regional agreements are bringing together the noodles into ravioli.” And “someday,” Donnan concluded, “you might stich them together and get lasagna, the big multilateral agreement.”

The Atlantic Council will continue to press for an open and robust dialogue about the benefits and challenges of the ambitious US trade agenda.