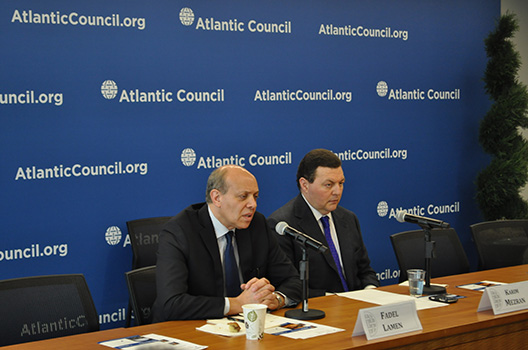 Under the auspices of the Libya Working Group, the Atlantic Council’s Rafik Hariri Center for the Middle East hosted Fadel Lamen, a Nonresident Fellow and Chair of the National Dialogue Preparatory Commission in Libya, for a roundtable discussion about the current situation in Libya and the status of ongoing negotiations. Lamen was recently in Geneva as a participant in UN-brokered talks, and he spoke to the audience about the political dialogue and its aims to resolve the crisis between Libya’s competing governments. The conversation focused on the developing situation, prospects for a unity government, and the international community’s role in Libya.

Lamen began by describing the crisis between the rival Tobruk-based House of Representatives and the Tripoli-based General National Congress and its economic and humanitarian impact. Due to continued violence and the failure to reach a political settlement, Libya has seen spikes in food prices, a limit on transportation in and out of the country, a rise in black market dealings, and the displacement of large numbers of people.

Lamen identified four tracks that the Geneva Dialogue will pursue to form a comprehensive solution: first, establish dialogue with the armed groups and broker a ceasefire; second, use municipal council dialogues to establish local facilitators; third, reach an agreement between the two main political parties; and four, include the tribes to weave in the fabric of Libyan society. The top priority for any successful unity government, he said, would be to provide food and security for all Libyans.

Regarding international assistance, Lamen cited terrorism as a primary reason the international community should empower the Libyan peace process, stressing that terrorism is a reality in Libya today and is a threat to its neighbors in North Africa and across the Mediterranean in Europe. He praised international efforts to limit the flow of weapons into Libya and said that this is a positive step to de-escalate the conflict. But he urged more creative thinking to incentivize warring factions to lay down their weapons, as proposals such as travel bans have limited impact on the ground. Lamen added that if the dialogue is embraced and is successful, then the international community will have one government (instead of two) with which to work, and it will have a partner against extremist terrorism.

The roundtable convened more than forty people, including US government personnel, experts from think tanks and nonprofit institutions, private sector stakeholders, and prominent members of the Libyan-American community.