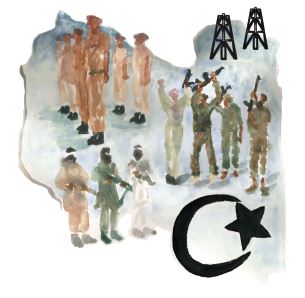 Many Libya observers cite the Qaddafi-era legacy of weak institutions and the conduct of the 2011 revolutionary war as key obstacles to the country’s democratic transition. The new Libyan authorities’ policy of appeasement, however, is just as much a factor in undermining political progress. On Monday, May 5, 2014, the Rafik Hariri Center for the Middle East hosted an event to launch a new Atlantic Council report, Libya’s Faustian Bargains: Breaking the Appeasement Cycle, by Senior Fellow Karim Mezran, Cambridge University researcher Jason Pack, and ForeignPolicy.com’s Mohamed Eljarh. The event featured a discussion with Jason Pack and commentary by Professor Emeritus I. William Zartman of the Johns Hopkins School of Advanced International Studies (SAIS). Mezran moderated the discussion.

Pack began by highlighting the main features of the report, focusing on three key components of the analysis—the center versus the periphery, statelessness, and appeasement—and how they constrain Tripoli and its international partners. Libya currently faces a battle between a weak “center,” which controls national institutions, and a marginalized “periphery” that can challenge the center’s legitimacy through use of force and its appeal among local populations. Statelessness is a trait rooted in the country’s unique history and therefore not merely the product of Qaddafi-era policies or Western intervention. At the core of the authors’ analysis is that post-revolutionary Libya’s governments are guilty of serially practicing appeasement, emboldening elements with parochial interests, and further losing legitimacy to lead.

Zartman commended the detailed mapping of political and armed forces in Libya. He questioned, however, who within Libya’s government would be able to implement the outlined policy recommendations and how the destructive cycle could be broken.