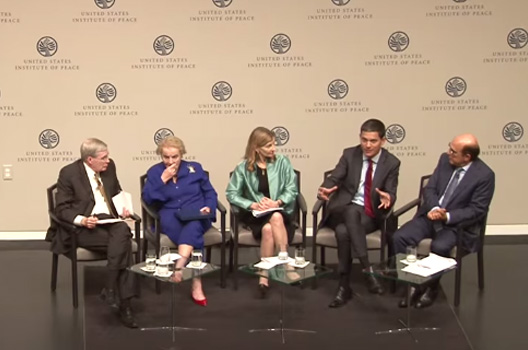 On September 18, 2015, the Atlantic Council and the United States Institute of Peace convened the third public hearing of the Middle East Strategy Task Force (MEST). The event featured MEST Co-Chairs Madeleine K. Albright and Stephen J. Hadley leading a high-level panel discussion on the refugee crisis in the Middle East.

Manal Omar, convener of MEST’s “Rebuilding Societies” working group and the Acting Vice President of USIP’s Center for Middle East and Africa, began the hearing by summarizing her group’s findings and recommendations for how international and regional stakeholders can more effectively address the crisis and ease high levels of suffering and desperation.

Albright then gave remarks, detailing her own experience as a refugee. She described the current situation as both a humanitarian and a political crisis, and called on the international community to more adequately respond both to the refugee crisis and the conflicts that are driving it. Hadley then moderated a panel discussion that included Albright as well as former UK foreign secretary and President of the International Rescue Committee David Miliband, USIP President Nancy Lindborg, and Mayor Antoine Frem of Jounieh, Lebanon. The panelists spoke at length on what they described as the political failures both internationally and in the region that have led to the protracted wars in Syria, Iraq and elsewhere, generating the refugee crises.

Lindborg emphasized the scope of the problem by citing UN figures that show 60 million people are displaced worldwide, and that the average time of displacement for a refugee is now 17 years. She pointed out that these statistics affirm that the problem is a long-term emergency that requires long-term commitments.

Miliband, having just returned from the Greek island of Lesbos, spoke of the 2,000 to 3,000 refugees arriving there every single day. Miliband agreed with Lindborg’s assessment that long-term approaches are required. He also recommended that the MEST Co-Chairs be “radical” in their approach to solutions. From a practical standpoint, Miliband also spoke positively about the success that aid organizations have been having with cash distribution rather than in-kind goods, noting the efficiency that cash-based programs created in terms of allowing refugees to tailor assistance to their own personal needs.

Mayor Frem then detailed his experience as a civil servant and municipal leader in Lebanon, a country that has taken in 1.2 million Syrian refugees—a figure, the Mayor pointed out that is proportional to the United States dealing with an influx of 90 million refugees. “The most critical is the education sector,” Frem said. “Our public schools cannot handle the amount of refugees. We barely can service our local people.”

During a brief dialogue portion of the program, a few key ambassadors present had the opportunity to share their national perspectives. Turkish Ambassador Serdar Kilic noted the incredible pressure his country is under in terms of the refugee situation, with little international assistance. UK Ambassador Sir Peter Westmacott discussed the view from his country, as well as what some other European nations are doing, admitting that the European response as a whole has heretofore been inadequate.

The program then moved to an open question-and-answer section with the audience. One audience member questioned how the international community could sell long-term resilience to host countries that have no desire to host refugees over the long-term. Lindborg pointed out that refugees, when embraced politically and socially, can be assets to a host country. She also added that if host countries don’t want to take on refugee populations permanently, then they should consider that the primary factor in a refugee’s repatriation is whether or not they believe that it is safe to return, calling attention to the fact that the refugee situation is a secondary effect of the political crises roiling the Middle East.

Hadley then asked the panel about how to begin building resiliency in refugee communities and how to integrate displaced populations into local economies and societies. Frem responded by saying that the task is daunting—refugees now represent 25% of Lebanon’s population.

A member of the audience then asked Albright how the United States and Russia can contribute positively to the crisis. She responded by saying that the two countries do have an opportunity to cooperate, especially with Russia’s September presidency of the UN Security Council. However, she strongly emphasized that the West must not separate the Syrian issue from the Ukrainian one, for which Russia bears responsibility. She further suggested that real cooperation on the humanitarian situation in Syria would be a good way for Russia to begin to demonstrate that it is a responsible country.

Hadley suggested that perhaps the answer to stemming the flow of refugees was to establish a safe zone in Syria for the sole purpose of civilian protection—not to be mixed with the training of anti-government rebels. Miliband, however, believed that this would be inadequate, because it is not a solution for the whole of Syria, and suggested that it would embitter innocent Syrian civilians who find themselves outside the scope of the safe zone. He repeated that the international community must show a willingness not just to supply aid to displaced populations, but to stop the violence being meted out by the Assad regime against civilians in Syria. Hadley agreed, but noted that such an intervention has been lobbied for and dismissed since the civil war began in 2011. It is important nonetheless, he said, to find solutions despite these political obstacles.

Albright then fielded a question about the United States’ role in accepting refugees, noting that “this is what we’re about,” and reiterating previous comments that refugees coming to the United States for protection and finding prosperity is an American story. Lindborg noted that while it’s important to accept refugees, this will have no impact on the flow of refugees. The international community must address the civil wars that are driving the crisis. She also noted that if the United States is going to step up, it is going to need Congress to be a willing partner.