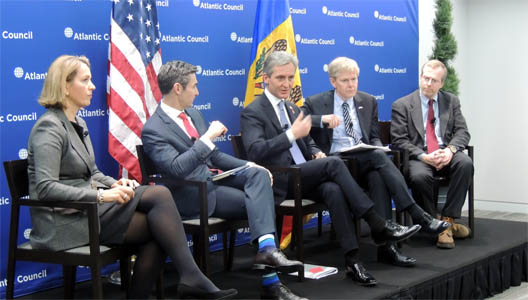 The three-month-old crisis in Ukraine, escalated last weekend by Russia’s invasion of Crimea, has steeled Ukraine’s small neighbor, Moldova, to step up its efforts to reform its economy and political system so it can integrate as quickly and well as possible with Europe, Moldovan Prime Minister Iurie Leanca told diplomats, US officials, and other policymakers at the Atlantic Council. Speaking after meeting at the White House with President Obama and Vice President Biden, Leanca said US officials have shown “an unprecedented level of interest” in his country’s four-year-old effort to move from Russia’s orbit to integrate with the European Union.

Leanca expressed hope that the Russian military strike into Crimea will persuade both Washington and European governments to provide strong, more consistent support for the neighbors of Russia trying to join Europe. Russia, having succeeded for years in exerting pressure on Moldova and Georgia by occupying parts of their territory, has now extended the tactic to Ukraine, he said. Because Russia’s military occupation of Moldova’s Transnistria region has survived for 23 years as a successful policy of coercion for Moscow, “these frozen conflicts, these separatist movements” backed by Russian troops have become “very contagious,” he said.

Leanca visited the White House to begin a more developed “strategic dialogue” with the US government, and said the crises in Ukraine and Crimea are forcing the West to refocus on his region. “The US is slowly getting back to Eastern Europe,” he said.

In a speech and a subsequent panel discussion with US and European policy specialists, Leanca’s points included these:

ON IMPLICATIONS FOR MOLDOVA OF THE CRISIS IN UKRAINE.
Leanca said Moldova has drawn three lessons from the crisis in neighboring Ukraine, where public protests erupted in November when former president, Viktor Yanukovych reversed his government’s pursuit of closer ties with the European Union. “The first lesson from the Ukrainian experience is that we need to be even more determined, more motivated to pursue the reforms at home, in line with European standards, in line with our commitments,” he said.

“We shouldn’t focus just on negotiating the agreements…. We need to focus on preparing the country to benefit from those agreements once they are in place.  Are we ready today to benefit from the association agreement and especially from the free trade area?  I would say ‘not yet,’ because our goods are not competitive enough.”

“Somehow I personally and my colleagues believed that the advantages of the European integration are so self-evident to everyone in the society that we should not even focus” on explaining them to the citizenry. Instead, “we should focus on reforms, we should focus on negotiations … and then the advantages will be so convincing that” selling the public on integration with Europe was not a top   priority, he said.  “I think it was one of the biggest miscalculations we made” – one exploited by the country’s large Communist Party, which has campaigned against the pro-Europe policies. “Three years ago, more than 60 percent [of Moldovans] were in favor of European integration,” and today the country is evenly divided between those who favor joining Europe and those who prefer the Russian-led Customs Union that President Vladimir Putin’s government is pressing Moldova and the other former Soviet republics to join.

ON THE NEED FOR THE EUROPEAN UNION TO CLARIFY ITS MEMBERSHIP POLICY.
The European Union “has weakened the pro-Western elites” in Ukraine, Moldova and Georgia by failing to clearly offer full EU membership to those states that successfully implement integration programs with the EU under its Eastern Partnership, Leanca said. Such a promise has not been made because it requires approval from all twenty-eight EU member states.

Swedish ambassador to Washington Björn Lyrvall, one of the architects of the Eastern Partnership project, agreed that EU policy is unclear. “There has been a sort of ‘don’t ask, don’t tell’ policy” by which “the members of the Eastern partnership shouldn’t ask for membership [in the EU] and we won’t tell them” whether full membership might eventually be offered, Lyrvall said.

Leanca voiced hope that Ukraine’s crises, including the Russian invasion, might jolt European governments to re-think their stance. “I hope these developments in the region still would convince even the skeptical capitals, and there are not so many of them, as I understand,” to support full EU membership for the Eastern Partnership countries, he said.

ON MOLDOVA’S ECONOMIC PROGRESS AND CONTINUED DOMESTIC PROBLEMS.
Four years after a pro-Europe coalition was elected to office in place of the country’s Communist Party, it has made progress but needs more, Leanca said.

“Moldova today is much better and much safer than it was four years ago.  If you look at the economy, for example, we had a cumulative growth in the last four years [of] twenty percent. Last year was the best year, eight percent … as the IMF says, due to the reforms which were enacted in the last three, four years.”  He added, “We hope, more or less, this year to be able to follow the same path” of growth.

The European Union’s decision in February to end visa requirements for Moldovans will help promote business opportunities for the country’s citizens, he said.

At the same time, “We have many problems ahead of us. … “The biggest challenge is the unreformed law enforcement agencies … the problems of our police, which is making certain progress, but still is behind the expectations of our people.” Corruption remains And the social and economic conditions of many of the 3.6 million Moldovans remain extremely hard, he noted, in a country that still is one of the poorest in Europe.