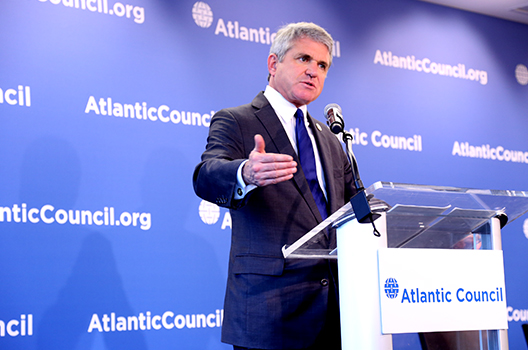 Following the end of the second round of NAFTA renegotiations, the Atlantic Council’s Adrienne Arsht Latin America Center—in partnership with the Council’s Global Energy Center—hosted a discussion on a modernized NAFTA’s potential to revolutionize North America’s energy space on September 7, 2017. The event featured special remarks by Chairman Michael McCaul (R-TX 10th District) and followed with a panel of leading experts on trade and energy, including David L. Goldwyn, chairman of the Atlantic Council’s Energy Advisory Group and nonresident senior fellow with the Adrienne Arsht Latin America Center; Jeffrey J. Schott, senior fellow at the Peterson Institute for International Economics; and Shawn Donnan, world trade editor at the Financial Times. The conversation was moderated by Amy Harder, energy reporter at Axios.

Kicking off the day’s conversation, Chairman McCaul stressed the importance of NAFTA to the future of the economy and security of North America, noting a need to modernize the agreement to reflect the immense changes that have taken place in the economy, in technology, and in the means of commerce. He cited the massive number of jobs linked to NAFTA’s existence, particularly as it relates to the deeply integrated energy sector between the United States, Mexico, and Canada, which is “on track to be energy independent by 2020.” Chairman McCaul reiterated, “NAFTA is not perfect—nothing is—and it must be modernized. But it has helped foster the important, dynamic energy relationship between our countries. And when I talked to both the Mexican delegation and to US energy companies, the idea of putting energy under the umbrella of the NAFTA framework was a win-win.”

The panel unanimously agreed that NAFTA’s benefits to the US economy, particularly energy, far outweighed any negatives. David Goldwyn described NAFTA’s positive effect on the sector in three parts: expanded markets for the United States, improved efficiency in energy production across the board, and an increased resilience for US energy against a volatile market and unexpected crises. Trilateral collaboration has also been beneficial in terms of North America’s developing renewable energy sector thanks to greater accessibility to a wider range of energy types, such as solar energy from the Baja Peninsula, hydroelectric energy from British Columbia, and wind energy from Texas.

The discussion touched on the domestic US politics of NAFTA and the potential resulting effects on renegotiation proceedings. Amy Harder steered the discussion around the challenges posed by the uncertainty that has stemmed from President Trump’s remarks about Mexico and NAFTA. Mr. Donnan noted, “When the technicians negotiate a deal…and Bob Lighthizer takes it to the president, is the president actually going to sign off on this thing? That’s a really open question, and it’s one that hasn’t been there in American negotiations before.” The increased caution by both US businesses and the two NAFTA trading partners because of such questions could stagnate North America’s energy growth, the panelists argued.

The US-Mexico political framework could also affect investment in the necessary infrastructure for the industry and lead to a dramatic decrease in direct US investment in Mexican oil. “In this market, with these choices, there are a lot of places that companies can invest. NAFTA provided that security before. People were sure NAFTA would give at least US investors that protection, so they took the risk and it was enormously successful for Mexico. If that goes away, my bet is that you’ll see a dramatic drop-off in that investment. That’s bad for Mexico, that’s bad for us, and that’s bad for energy security. That’s what’s at stake,” said Mr. Goldwyn.

The panelists concluded with their predictions on the outcome of the negotiation process as well as the likelihood of a new tariff on solar energy technology coming from China. They unanimously agreed the outcome will not become clearer until 2019 and that a solar tariff is highly probable. Expressing concern for what protectionist leanings and a US preoccupation with the trade deficit will mean for the growth of the US energy industry, Mr. Schott put it simply, “The purpose of a trade agreement is to increase trade and investment…What you want is to expand exports and to expand imports, so that you make better use of the resources in all your trading partners and become more efficient and productive. That’s where you get higher economic growth, and through higher economic growth, you get more employment.” A modernized NAFTA, done carefully and considerately, can bring that prosperity to all three signatory countries.