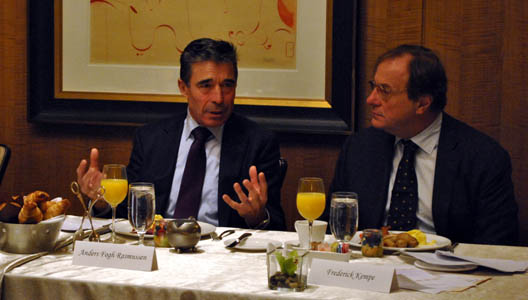 NATO Secretary General Anders Fogh Rasmussen discussed the crisis in Ukraine and the preparations for the upcoming NATO summit in Wales with members of the Atlantic Council and the Washington, DC security and policy community in a working breakfast on March 19, 2014. The event was moderated by Frederick Kempe, president and CEO of the Atlantic Council.

The participants addressed the unfolding crisis in Ukraine, particularly stressing the implications of the Crimean referendum, the importance of a unified international standpoint on Russia’s ongoing violations of Ukraine’s territorial sovereignty, and the future of NATO-Russia cooperation. Further, the discussion assessed the implications of the Ukraine crisis for the NATO Summit agenda, and examined goals, expectations, challenges, and opportunities facing the meeting in Cardiff in September.

The working breakfast was hosted as part of the Atlantic Council’s broader 2014 NATO summit campaign, which includes the Council’s “Toward a Europe Whole and Free” conference partly funded by NATO, the 2014 Young Atlanticist Summit organized on the sidelines of the official NATO summit in Wales, congressional outreach, and the Emerging Leaders Working Group, summoned by the Council upon the request of Secretary General Rasmussen. During his visit to Washington, DC, Secretary General Rasmussen will also meet with senior United States government officials and give a series of speeches on NATO’s role in addressing the transatlantic community’s most pressing security challenges and the crafting of the seminal 2014 summit agenda.