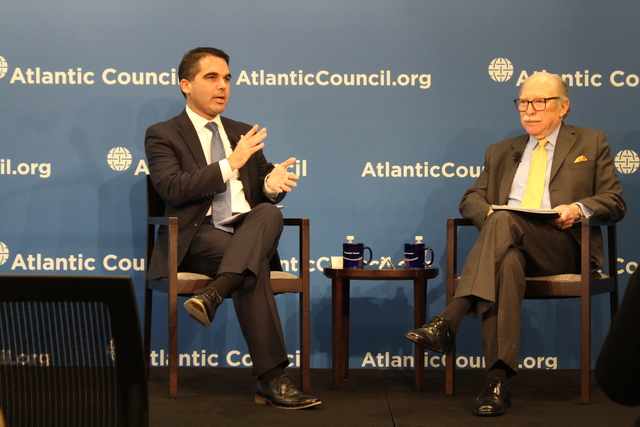 Last month, the Venezuelan government fast-tracked the presidential election, announcing April 22 as the official date. To explore the declining electoral conditions and the potential for international engagement, on February 21 the Atlantic Council’s Adrienne Arsht Latin America Center hosted a public event and released a new Venezuela poll of 800 in-country respondents that showed collapsing levels of trust in institutions and profound concerns over the economic crisis and food shortages.

Jason Marczak, director of the Adrienne Arsht Latin America Center, opened the event with a  conversation with H.E. Carlos Reyes, the Colombian ambassador to the United States. Ambassador Reyes highlighted the history and the depth of the crisis in Venezuela, noting the urgent need for action by the international community.

He affirmed that “all of the humanitarian and all of the international institutions are already present in Colombia…if the international community reacts now, there is a way of building and reacting before we see side effects.”  Regarding the elections, he praised the path built by the Lima Group–a multilateral body comprising representatives of seventeen countries established to support a peaceful exit to the crisis in Venezuela. He stated that “the most important thing now is to be able to attract other countries, especially the Caribbean countries.”

Former President of Bolivia Jorge Quiroga followed with remarks on the crisis and the government’s “reverse Midas touch,” its inability to generate any profit or improve the economy. He advised the international community to follow his “SISODEMO” strategy: continue Sanctions, involve the International Criminal Court (ICC), begin Seizures of assets, involve the Organization of American States (OAS), continue Diplomatic relations, continue Expulsions from regional groups, take a multilateral approach to Migration issues, and distribute Oil revenues through the Venezuelan Congress. President Quiroga emphasized that now is the time for the international community to put everything on the table, “otherwise we will have to be sad about the fact that a North Korea was installed in the Caribbean on April 22, under our watch.”

To begin, Mr. De Icaza established that nothing could bring about a fair election on April 22. To this end, he cited four main issues: the date of the election, the political prisoners, the 48-hour registration for Venezuelans abroad, and the Opposition participation. However, Mr. Martínez pushed back on the relevance of the date, stating that “even if the presidential elections were held in December, right now there are no conditions for free and fair elections whatsoever.”

Mr. Lander and Mr. Martínez further explored the electoral conditions in Venezuela. Both panelists emphasized the 2015 legislative election as a turning point for the nation. Mr. Martínez highlighted the existing conflict of interests created when votes lack anonymity, especially when 4.4 million voters recognize they are dependent on the government for food. Meanwhile, Mr. Lander focused on the restriction of opposition parties as well as the restriction on electoral observation.

Regarding international engagement, Ms. McCoy discussed the importance of multilateral, multilevel engagement. She stressed the need to tie clear demands to multilateral action. In the case of electoral observation, she suggested that missions could provide a point of negotiation for the National Electoral Council (CNE)  to set better electoral conditions. In the case of sanctions, Ms. McCoy encouraged additional sanctions, noting that “the key thing to add to the existing sanctions is a clear message about what actions or behavior by Venezuelan officials who are targeted by the sanctions would merit suspending those sanctions.”

Following Secretary Tillerson’s recent tour of Latin America, the conversation shifted to a debate on possible oil sanctions. The panelists agreed oil sanctions had too many negative consequences. Mr. Lander differentiated these sanctions from individual sanctions, stating “there is something very different about sanctioning a whole country. I live in Venezuela; the economic situation is miserable and those sanctions would make conditions worse.” They also discussed the dangers of isolating Venezuela.

As the event drew to a close, Mr. De Icaza brought the conversation back to a regional focus. He pointed out the importance of discussing the upcoming elections in Colombia, Brazil, and Mexico and the urgency to encourage citizens to pressure their governments: “If a country is not defending democracy abroad, it’s not protecting its own democracy.”