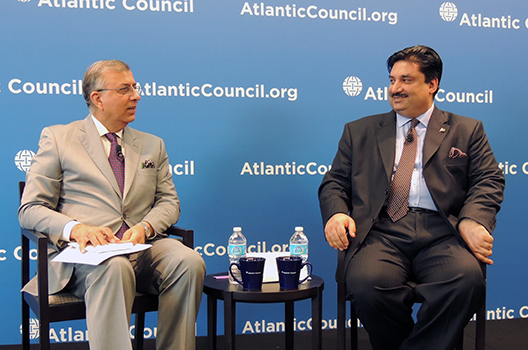 “Pakistan’s bilateral and regional trade priorities are to trade more. Our belief is that Pakistan’s economy cannot grow if it won’t open up to the neighbors,” stated Pakistan’s Commerce Minister Khurram Dastgir Khan. Speaking at a South Asia Center discussion, the Minister argued that Prime Minister Nawaz Sharif is “committed to resolving long standing issues with its neighboring countries and to enhancing trade and economic relations with them.” Khan’s visited Washington, DC to represent Pakistan in the US-Pakistan Trade and Investment Framework Agreement negotiation meetings.

The importance of bilateral and regional trade is identified in the PML-N party manifesto, argued Khan, and the PML-N government is following a three point agenda of trade, investment, and connectivity within the region and the broader international community.

Khan recognized the difficulties facing Pakistan’s economy. The country is undergoing robust economic reforms that will yield fruit in the long run, but may present short term costs. For example, the government recently raised tariffs on electricity—a difficult decision due to the high short term costs—but a necessary step for Pakistan’s energy and economic sustainability.

When asked about visa difficulties for Indian nationals and the challenge it presents to cross-border trade and investment, Khan acknowledged the “thorny issue” and suggested that a solution requires political will on both sides of the border. He agreed that without flexible visa access, investors from both countries cannot benefit from trade and investment opportunities. Khan also said that the government is looking to diversify Pakistan’s trade and economic base, and investing more in research and development of agriculture, industrial, and energy sectors.

In terms of enhancing trade, the PML-N government obtained “GSP Plus” status from the European Union. A significant achievement, this was the first ever trade concession given to Pakistan by Europe. More importantly, this occurred after a rigorous scrutinizing process of approval from the European Commission, rather than a quid-pro-quo exchange, said Khan.

“We believe that the GSP Plus status given to Pakistan is not a reward of our reforms for better human rights conditions in the country, rather it is an incentive to do so. Now we are looking at the United States for similar incentives,” added Khan. He said that Pakistan’s trade with the United States is just above $3 billion—a mere 0.00016% of the United States’ total trade volume of over $3 trillion. Khan argued that trade concessions from the United States would create insignificant costs to the US economy, but would make a huge difference within Pakistan, including increasing employment and eradicating poverty in the country. Admitting that Pakistan and the United States have witnessed rocky relations recently, the Minister urged that robust economic relations can go a long way in repairing the mutual relationship.