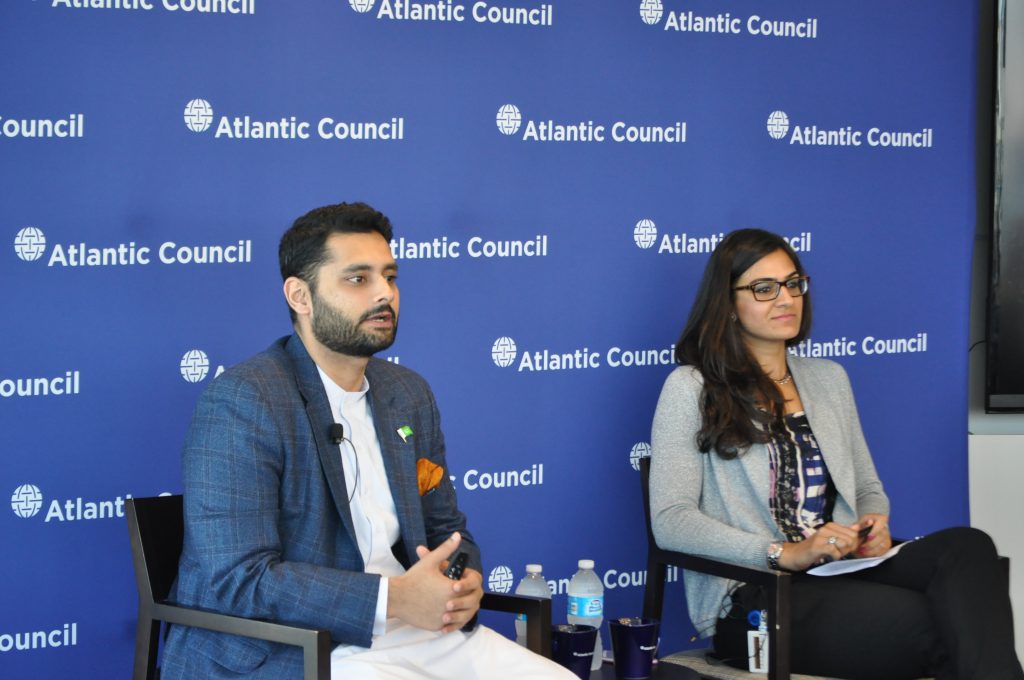 From a western perspective, Pakistan appears to be a country embroiled in numerous challenges, namely security and governance. But a growing movement comprised of Pakistan’s ordinary citizens seeks to reclaim the space taken by these challenges. Mohammed Jibran Nasir is at the heart of this movement, and visited the Atlantic Council in May to share this new narrative for his country.

“We are not a country of Taliban apologists,” Nasir stated. Not every Pakistani is a Taliban apologist, yet Nasir stated, Pakistan is facing a resurgence of religious violence and rhetoric due to the higher prevalence of hateful, non-inclusive rhetoric over secular teachings. “They are being exposed to radical literature more effectively than by progressive, secular, liberal groups.”

Clerics are using mosques as “houses of terror,” Nasir warned. Moreover, “the government is failing to take control of the problem.” The government doesn’t even acknowledge the problem according to Nasir. 50,000 civilians and 5,000 soldiers have died in what primetime media outlets suggest as the “US Government War on Terror.” But Pakistan’s government has yet to accept this as “its own war,” he argues, suggesting that despite the disputable source of these deaths, a society that sees this level of violence requires significant government effort to prevent more death.

The citizens’ movement started following the attack on Peshawar Army Public School, and the failure of Lal Masjid Cleric Maulana Abdul Aziz to condemn the attack. Citizens and activists protested outside Lal Masjid to “reclaim their mosque.” But the gathering was bigger than one protest. The movement originated from a desire to understand the elements of Pakistani society that essentially provide impunity to religious leaders despite condoning indiscriminate violence.

Nasir stressed that the core of Pakistan’s problem is not radicalization. Muslims nor Christians are radicals. But rather, “when violence becomes a way of life, people become desensitized and dehumanized,” argues Nasir. “The oppressed becomes the oppressor” and individuals believe that imposing blasphemy law is their “God-given right.”

Instead, Nasir pointed out the failure of the State. “The government of Pakistan—the executive, the parliament—seems to have failed the people. Either people are not afraid of it or they do not have faith in it.”  This leads to common people “trying to assume the role of enforcing laws—in whatever [ways necessary]—something the state is supposed to do.”

Nasir founded Pakistan for All, a citizens resistance forum that fights this religious intolerance and unites concerned citizens outraged by the persecution of minorities in Pakistan. Apart from being at the forefront of the conversation on social media and on the ground in Pakistan, the organization is developing resources to improve the situation, including a toolkit for effective political engagement, a phone application that compiles data on violence, a helpline for persecuted individuals, and more. Nasir’s efforts are creating a community in Pakistan that, for the first time, is talking openly about issues of extremism and blasphemy. “If you are not going to stand with each other, nobody is going to stand for you,” stated Nasir, suggesting that this is just the start. To be successful, “we need to have a bigger sense of community.”

Nasir is staunchly committed to bring about change but knows the risk of this work. His colleague and close friend Sabeen Mahmud lost her life in a targeted killing in April after she hosted a conversation on Baloch rights.  He states, “it will get worse and more dangerous for us. But if we are going to bring change and if we are going to reclaim space, we have to enter the territory they have encroached upon.”