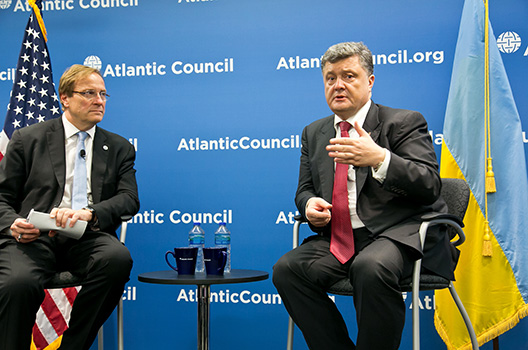 Ukraine’s President Petro Poroshenko spoke at the Atlantic Council today, outlining his hopes to use his country’s fragile, two-week-old truce with Russia to ultimately defeat Moscow’s efforts to wrest control of southeastern Ukraine.

In the final stop of a fast-paced official visit to Washington, Poroshenko accepted one of the Council’s annual Global Citizen Awards, and responded to questioners about his strategy to reverse Russia’s seizure of control over part of Ukraine’s Donbas region. He explained how he hopes to use the help he is seeking from the United States and its allies to defeat Russia without renewed warfare.

Poroshenko reiterated the requests he made earlier in the day to a Joint Session of Congress and to President Barack Obama at the White House: for arms, for continued economic sanctions against Russia, and for help in stabilizing Ukraine’s economy and enacting reforms against corruption. Speaking on his 103rd day in office, he acknowledged public discontent in Ukraine that reforms to reduce endemic corruption in state institutions have not already been passed.

Weapons—‘to Prevent the Next War’

Poroshenko said his request for weapons is not a prelude to attempting a military reversal of Russia’s assault, which has put about half of Donbas under the control of its proxy forces, supported by Russian regular military units. He amplified on his direct appeal to Congress made hours earlier to supply arms, saying that such weapons would “not help us to win this war. The weapons will help us to prevent the next war.” “And that is what we urgently need. To build up a … very professional, very effective Ukrainian army,” he said, as a deterrent to further Russian attacks.

Poroshenko described a conversation with a Western government official (whom he did not identify) who said his government would refuse Ukraine weapons because its army was seen as corrupt and permeated with Russian agents. Ukraine’s revitalization of its armed forces, and its trial by fire in the summer offensive that pushed back the Russian-led forces, has changed that, Poroshenko said. “Now, Ukraine has an army” that can absorb and use assistance from the US and its allies.

Senator Robert Menendez (D-NJ), the chairman of the Senate Foreign Relations Committee, spoke after Poroshenko and said the Ukrainian president’s speech had been instrumental in winning unanimous approval of a military aid bill for Ukraine. Congress may approve the supply of weapons to Ukraine’s military, said John Herbst, the director of the Atlantic Council’s Eurasia Center, but probably not before November.

Poroshenko, when asked by the Kyiv-based Hromadske TV channel for his backup plan should the still-fragile cease-fire collapse, said: “If we do not have a cease-fire, if it would be we have Russian aggression … all Ukrainian patriots will … go to fight against [the] aggressor.”

A Political Strategy in Donbas

“I know exactly how to win the peace. And I promise you, I’ll win the peace,” Poroshenko said. He outlined a plan to force Russia’s proxy fighters in Donbas—which comprises Donetsk and Luhansk provinces—to face pressures for accountability from Ukrainian citizens in the region.

Amid the traumas of warfare, some Donbas residents have accepted the claims of the Russian-backed militias there that the militias are defending the region against an onslaught by a supposedly fascist Ukrainian government, he said. Under the cease-fire, now two weeks old, Donbas residents increasingly will focus on the Russian-backed militias’ inability to govern, Poroshenko said: the lack of schools, “no electricity, no heat,… no salary, no jobs, nothing.” Residents will conclude, he said, that “this is a catastrophe. ‘Why should I keep these people with weapons who make my life so difficult?’”

As part of the effort to compel the Russian-backed forces to face public accountability, he said, his government will use a law passed this week, under the terms of the truce accord with Russia, to grant a special status to the Russian-held region. The new law includes a requirement for elections there, Poroshenko said, a provision that will increase local, public pressure on the militias to justify their presence in Ukraine.

In response to a question, Poroshenko said Ukraine’s economy has become an existential crisis. “Under a condition of [continued] war, Ukraine and the economy cannot survive,” he said. “That’s why I’m so insistent on the necessity of the peace process,” and on immediate reforms to confront corruption and lay the ground for economic growth. “If we urgently, right now, do not bring reform to the country, the country cannot survive,” he said. And from partners, Ukraine needs “not only money or weapons,” but “strong cooperation” in achieving reforms.

Poroshenko lamented the Ukrainian parliament’s failure to pass, in his absence, reform measures he has submitted, which include a law to create a central anticorruption bureau within the government. To a question from Kyiv’s Hromadske TV, he said, “when I come back [to Kyiv] we will move the anti-corruption reform, I promise you.”

“We will build a new, effective, market economy in Ukraine,” he said.

Poroshenko’s remarks during the discussion included these:

The Atlantic Council presented President Poroshenko with one of its 2014 Global Citizen Awards, an honor traditionally presented in New York each year during the session of the United Nations General Assembly. The award recognizes global leaders who have made exceptional and distinctive contributions to the transatlantic relationship. Amid Ukraine’s crisis, President Poroshenko will be unable to attend this year’s award ceremony, on September 21, at which the other honorees will be Mexican President Enrique Pena Nieto, former Israeli President Shimon Peres, former Singaporean Prime Minister Lee Kuan Yew, actor and film director Rober De Niro, and composer and pianist Llewellyn Sanchez-Werner. At today’s Council event, President Poroshenko was presented the Global Citizen Award by Senator Menendez.