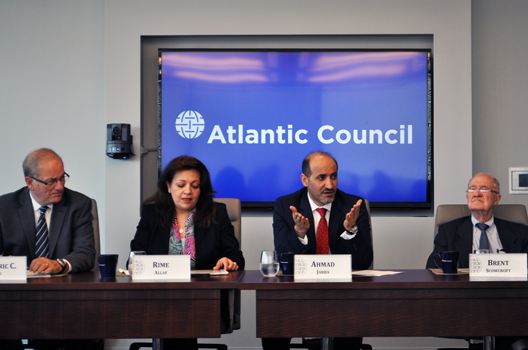 On May 8, 2014, the Rafik Hariri Center for the Middle East hosted President Ahmad Jarba of the Syrian National Coalition and his delegation for a private, off-the-record discussion. President Jarba and his delegation came to Washington to meet with members of Congress and high-level officials from the US government, including Secretary of State John Kerry and President Barack Obama, in an effort to deepen Washington’s material support for the opposition. The Atlantic Council event focused on the Syrian National Coalition’s request for US military assistance, the current state of the opposition, and the trajectory of the conflict as Syria moves toward presidential elections in June.