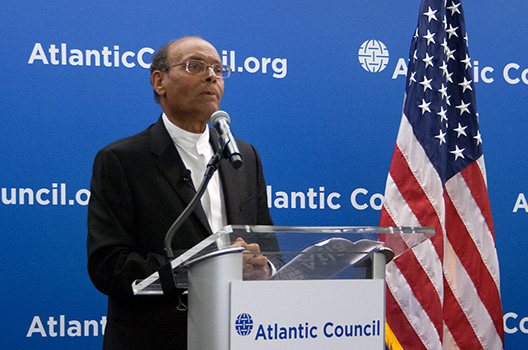 As Tunisia struggles to convert its 2011 Arab Spring revolution into stable democracy, the US and its allies frankly aren’t helping much, President Moncef Marzouki told the Atlantic Council.

“The West gave more support to the dictatorship, because of so-called stability,” than it now is giving to Tunisia’s democratizing government, said Marzouki, a medical doctor and human rights leader who has been guiding his country through its transition following fifty-five years as a one-party state.

Western governments should stop seeing the world’s Islamist movements all in one color, Marzouki said. They should welcome Tunisia’s political inclusion of its Islamist moderates, and provide helicopter gunships to fight its Islamist extremists.

“What I’m trying to say to all my friends in the West [is] that, if you don’t bet on Tunisia, if [you] do not support Tunisia fully, give us all what we need in matter of weapons to fight against terrorists, if [you] don’t come and invest in Tunisia so we can give more employment to our young and so forth – if Tunisia fails, you can say goodbye to democracy in the Arab world … for a century.”

That blunt message, Marzouki said, is what he will offer US officials during this week’s summit conference of US and African leaders.

Tunisia is close to completing an essential transition to democratic, elected government – the only one of the four Arab Spring states that is managing to do so, three years after they overthrew their authoritarian regimes. (Egypt has returned to thinly veiled military rule, Libya’s weak government is unable to stem civil warfare among regional militias, and Yemen’s regional uprisings and al-Qaeda violence threaten to undermine its slow-moving political dialogue.)

With Marzouki as president, Tunisia this year completed a new constitution to reinforce a secular, multi-party democracy. It is to hold parliamentary elections in less than three months. But the country has been jolted by Islamist militant attacks in recent months, notably by guerrilla bands in the rugged Chaambi Mountains, along the border with Algeria. Guerrillas attacked army posts there in July, killing fourteen soldiers in the worst incident. Al-Qaeda in the Islamic Maghreb (AQIM) also has claimed attacks in Tunisia, whose secular orientation it particularly opposes.

The guerrillas “are extremely well trained” and have combat experience from the extremist uprisings in Mali and Algeria, Marzouki said.

Like many authoritarian rulers, Tunisia’s former strongman, Zine el-Abidine Ben Ali, kept the military weak to prevent it from challenging his police-dominated state. So the army is poorly trained, with outdated equipment, Marzouki said. It desperately needs communications equipment, training, and, he said, twelve helicopters, such as US Blackhawks, to fight the new guerrilla threat in remote areas. The coming three months, before elections “could be the most dangerous three months in our history,” Marzouki said.

“When I hear [from Western officials] that ‘we are going to give you some helicopters so you can fight against the terrorists, but you will have to wait two or three years,’ – no, we cannot wait for two or three years. We need it badly now,” Marzouki said. “This is what I’m going to tell to all the US officials, and I hope that I will be listened to.”

{flickr set=72157645793973680}
During his speech and a subsequent question-and-answer session with foreign-policy specialists and journalists, Marzouki’s remarks included these:

Image: Tunisian President Moncef Marzouki urged the West to help Tunisia include its moderate Islamists in its new democracy, and offer weapons and military training for its fight against terrorists. (Atlantic Council)