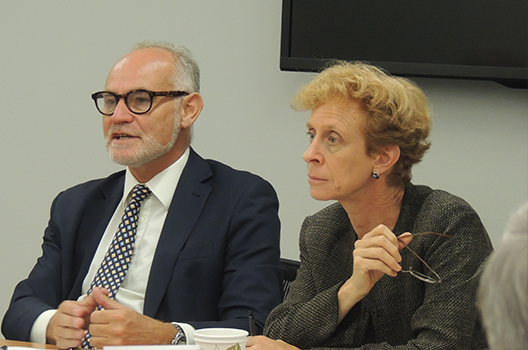 On September 28, 2016, the Atlantic Council’s Future Europe Initiative hosted a private, invitation-only roundtable with Mr. Crispin Blunt MP, chairman of the UK House of Commons’ Select Committee on Foreign Affairs. Members of Washington’s foreign policy and business communities discussed the future of the United Kingdom’s role in Europe and the world, and the potential impact of Brexit on the “special relationship” and transatlantic business. Mr. Blunt offered his perspective on how, despite the uncertainty of the negotiations, Brexit offers a positive vision for the United Kingdom’s role in the world. Mr. Blunt explored the possible outcomes of the negotiations, and what implications Brexit might yield in transatlantic relations and foreign policy cooperation.

Mr. Blunt is a member of the Conservative Party and member of parliament for the Reigate constituency in Surrey. Mr. Blunt was appointed as the parliamentary under-secretary of state in 2010 at the Ministry of Justice. In 2009, Mr. Blunt was appointed as the shadow home affairs minister with responsibility for security and counter-terrorism by former Prime Minister David Cameron. He was the chairman of the Conservative Middle East Council from 2003 to 2008, and has served as an officer for the Conservative Parliamentary Friends of India.

This event was held as part of a broader Atlantic Council effort to galvanize the leadership and strategies that will promote a strong, stable, and competitive Europe allied to a globally-engaged United States.