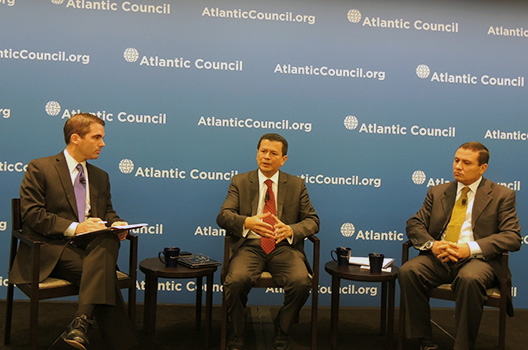 “It is much cheaper to supply aid to the region than to put all those soldiers on the border,” began Foreign Minister Carlos Morales of Guatemala. This was the beginning of a conversation hosted by the Adrienne Arsht Latin America Center on Thursday, November 13th with Foreign Minister Hugo Martinez of El Salvador and Foreign Minister Morales. Speaking to a packed room at Atlantic Council headquarters, the foreign ministers spoke of the challenges and opportunities their countries saw for economic development and improvement of security.

The countries of the Northern Triangle—Guatemala, Honduras, and El Salvador—have been highlighted in the past several months as the source of tens of thousands of unaccompanied minors crossing the border into the United States. The presidents of these countries came together for a historic meeting with Vice President Biden at the Inter-American Development Bank on Friday, November 14th, to discuss a joint effort to address regional stability and economic growth opportunities outlined in the Alianza para la Prosperidad del Triángulo Norte (Alliance for the Prosperity of the Northern Triangle). The foreign ministers joined Latin America Center deputy director, Jason Marczak, the day before to discuss the relationship between security and investment, and the important of developing a long-term strategy for the region.

Both ministers spoke about the importance of creating a business friendly infrastructure to attract investment, which would in turn bring greater stability to the countries. Foreign Minister Martinez cited the difficulty in attracting much-needed foreign investment when so many security issues still plague the country. “The important thing,” he said, “is to not judge by the past, but to see what we are doing now, and to judge by the present.” Foreign Minister Morales had other concerns; energy costs in Central America are fifteen times what they are in Mexico, making operating costs prohibitively high. Further, he elaborated, the institutions within the country are not transparent enough, and this deters investors from involving themselves in the region.

The Ministers emphasized the importance of development on all fronts simultaneously. Citizen security, economic development, immigration, and investment are all related, he argued. And now that the Northern Triangle has the attention of the United States, they’d like to keep it, he added. Jason Marczak noted that despite their proximity, the countries did not have a strong history of working together, and that this meeting was a positive step towards regional stability.