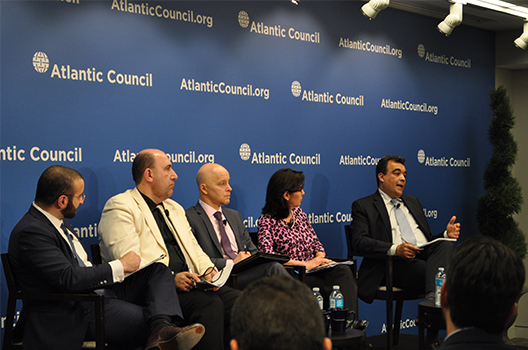 Shawaf introduced the two-year Syrian reconstruction initiative in his opening remarks. He reminded the audience that the future of the Middle East and its people is at stake in Syria, and that the conflict will continue to have implications that reach far beyond the Levant. Shawaf also touched on international engagement in Syria, saying that Russia should rethink its Syria policy and Iranian expansion in the region should not go unchallenged. He urged for the construction of a framework, comprised of relevant expertise, to help rebuild Syria.

Kadi explained that success in Syria depends on progress in four key areas: security, justice and reconciliation, society and economy, and governance and participation. He called for the restoration of basic capabilities and effective border control. He expressed support for safe zones in northern and southern Syria, but added that safe zones are only a temporary fix to a complex and long-lasting problem.

Diamond said that improving the livelihoods of Syrians is an important first step in rebuilding the country. To do so, he suggested empowering local governance structures, increasing service delivery of essentials, developing institutional capacity building, and improving constituency outreach. He also explained the importance of investing in existing local providers of technology, civil servants, and education. He emphasized the need to hold local leaders accountable to their populations, as well as the need to encourage transparency. Lastly, he urged funders to be aware of where their money is going and how it is being used on the ground in Syria.

Yacoubian addressed the importance of meeting current urgent needs in Syria in addition to planning for long-term reconstruction. She said that stability is a priority, but that it is part of a larger process. She also urged caution in underestimating the strategic and tactical challenges of rebuilding Syria. Yacoubian explained that tactical needs include security, access, and partners. However, she noted, strategic challenges are more consuming and must consider the tension between competing US policies.

Barabandi also noted the roles of Iran and Russia, respectively, and spoke about their divergent objectives from the United States in Syria. He took a broader perspective of the Syrian conflict, arguing that reconstruction is not isolated, and that actors cannot limit a vision of rebuilding to Syria alone.