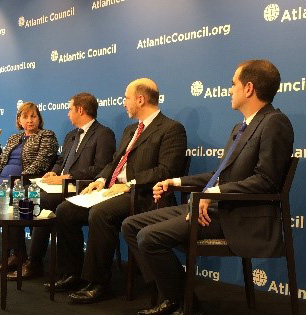 The event opened with remarks from Mr. Goldwyn, who provided context on economic and energy developments of the last decade throughout Latin America, from increasing hydropower and renewable energy production to fiscal crises that have impacted cross-border trade. Following this introduction, Mr. Aguirre, Director of National Transport and Measurement of Hydrocarbons in the Argentinian Ministry of Energy and Mining, discussed regulatory frameworks for LNG in Argentina, as well as the country’s trade relationships with Bolivia and Chile. When asked about the status of energy in Colombia, Mr. Castro, general manager at Sociedad Portuaria El Cayao (SPEC LNG), touched on the country’s opening of a new LNG import terminal, the government’s mechanisms for financing projects including thermal generators, and the country’s trade relationship with Venezuela. Mr. Castro also called for increased energy integration throughout the region, pointing to a successful trade relationship between Bolivia and Brazil.

Mr. Machado, Head of Natural Gas and Biofuels at the Empresa de Pesquisa Energética (Brazil’s Energy Planning Agency) expanded on the need for growing regional energy trade, and suggested that seasonal differences across South America, particularly between the north and south, could create a synergistic relationship particularly regarding storage capacity. Additionally, Mr. Machado described the role of LNG, wind, and solar power in Brazil. Ms. Saarnio, Principal Deputy Assistant Secretary at the US Department of State’s Bureau of Energy Resources, detailed opportunities for the United States to work cooperatively with Latin American countries on energy security and supply. She agreed on the need for increased regional trade.

Overall, each of the panelists signaled that their respective countries would be interested in further collaboration on these topics. They also agreed that there is potential for regional energy integration, and that LNG markets may contribute to cross-border integration.