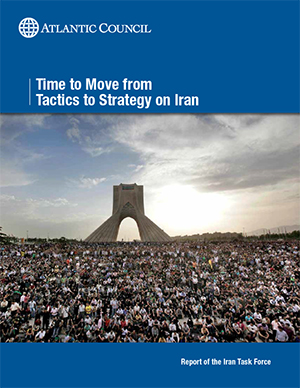 Please join the Atlantic Council’s South Asia Center on April 4 for the release of a new report entitled Time to Move from Tactics to Strategy on Iran.

This report, building on six issue briefs and more than two dozen events organized by the Iran Task Force over the past two and half years, analyzes the current tense situation between the United States and Iran, which presents the most serious and imminent foreign policy challenge facing the Obama administration in its second term. The report seeks to sketch a long-term policy toward Iran, recommends a series of steps to lay the groundwork for better relations with the Iranian people, and restore diplomatic relations with the Iranian government if progress can be made toward resolving the nuclear issue. It also discusses steps— including military action—that may be required to prevent Iran from developing nuclear weapons.

The Iran Task Force seeks to perform a comprehensive analysis of Iran’s internal political landscape, its role in the region and globally, and any basis for an improved relationship with the West.

The Iran Task Force is supported by the Ploughshares Fund.

Stuart Eizenstat heads Covington & Burling’s international practice. His work focuses on resolving international trade problems and business disputes with the United States and foreign governments, and international business transactions and regulations on behalf of US companies and others around the world. Ambassador Eizenstat has held a number of key senior positions, including chief White House domestic policy adviser to President Jimmy Carter (1977-81); US ambassador to the European Union, under secretary of commerce for international trade, under secretary of state for economic, business and agricultural affairs, and deputy secretary of the treasury in the Clinton administration (1993-2001).

Alireza Nader is a senior international policy analyst at the RAND Corporation. His research has focused on Iran’s political dynamics, elite decisionmaking, and Iranian foreign policy. His RAND publications include Israel and Iran: A Dangerous Rivalry; The Next Supreme Leader: Succession in the Islamic Republic of Iran; Saudi-Iranian Relations Since the Fall of Saddam: Rivalry, Cooperation, and Implications for U.S. Policy; and The Rise of the Pasdaran: Assessing the Domestic Roles of Iran’s Islamic Revolutionary Guards Corps. His commentaries and articles have appeared in a variety of publications, and he is widely cited by US and international media.

Greg Thielmann is a senior fellow with the Arms Control Association (ACA). Before joining ACA in 2009, he spent more than three decades in the executive and legislative branches of government, specializing in political-military and intelligence issues. He also worked for four years as a senior professional staffer of the Senate Select Committee on Intelligence and was a US Foreign Service officer for twenty-five years, last serving as director of the Strategic, Proliferation and Military Affairs Office in the Department of State’s Bureau of Intelligence and Research. His foreign posts include deputy political counselor of the US Embassy in Brasilia, Brazil; political-military affairs officer in Moscow, USSR; and political-military affairs officer in Bonn, Germany.

Barbara Slavin is a senior fellow at the Atlantic Council’s South Asia Center and Washington correspondent for Al-Monitor.com, a website devoted to news from and about the Middle East. The author of a 2007 book, Bitter Friends, Bosom Enemies: Iran, the US and the Twisted Path to Confrontation, she is a regular commentator on US foreign policy and Iran on NPR, PBS, and C-SPAN. A career journalist, Slavin previously served as assistant managing editor for world and national security of The Washington Times, senior diplomatic reporter for USA TODAY, Cairo correspondent for The Economist,and as an editor at The New York Times Week in Review.