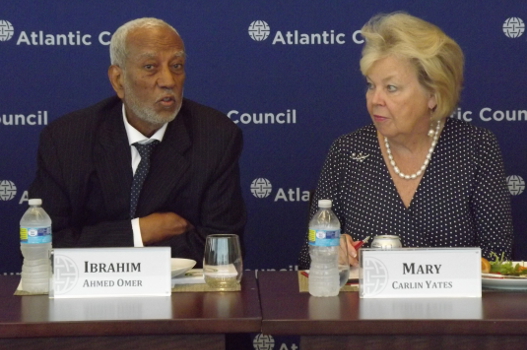 Africa Center Director J. Peter Pham gave a welcome and introduction, noting that the visit by the Speaker and those accompanying him—the highest-level Sudanese government delegation to come to Washington in a number of years—comes at an especially important time just one week after the trip to Khartoum of the United States Special Envoy for Sudan and South Sudan and as Sudan’s “national dialogue,” a process intended to unify the Sudanese people and resolve ongoing conflicts, is relaunched.

The Speaker began by discussing the role of the Sudanese Parliament, and how it can play a productive role in Sudan. Coming from the United Nations-sponsored meeting of the Fourth World Conference of Speakers of Parliament in New York, Omer pledged to implement the conference’s suggestions—including its pledge to “reconnect people with democracy”—as he leads the National Assembly in Sudan.

He acknowledged the often-rocky relationship between Sudan and the United States, and challenged the US to allow Sudan to do more in the region. He specifically mentioned the crisis in South Sudan and the spread of the Islamic State into neighboring Libya as areas of mutual concern for the United States and Sudan.

Atlantic Council Board Director the Honorable Mary Carlin Yates, former Special Assistant to the President and Senior Director for Africa on the National Security Council, moderated a discussion involving participants from both the US government and private sector following the parliamentary speaker’s remarks. The discussion covered details of the national dialogue—currently scheduled to begin October 10—as well the role of Islam in Sudanese society. Also raised were concerns about the impact of US sanctions on Sudan and the questions about human rights and accountability for alleged abuses of them in the country.

Also in attendance and participating in the discussion were Ambassador Eltaib Ahmed, Advisor in the Office of the Speaker; Hon. Ahmed El-Tahir, Chairman of the Council of States, the upper house of the Sudanese parliament; Hon. Ahmed Mostafa, Chairman of the Foreign Relations Committee of the National Assembly; Hon. Ebrahim Habani, National Assembly Member; Hon. Moatasim Hakim, National Assembly Member; Ambassador Maowia Khalid, Chargé d’Affaires og the Embassy of the Republic of Sudan; the Hon. Donald Booth, US Special Envoy for Sudan and South Sudan; and the Hon. Susan Page, Senior Adviser in the Office of the US Special Envoy to Sudan and South Sudan and former US Ambassador to South Sudan.