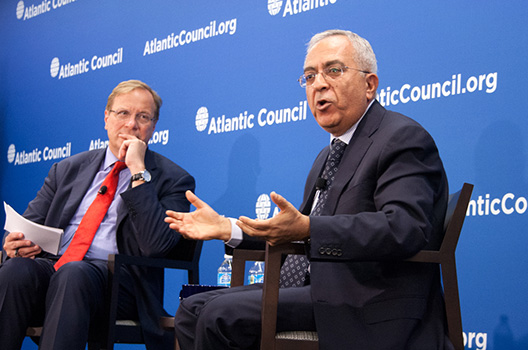 As Gaza’s agony deepens amid the warfare between Hamas and Israel, US and other diplomats are groping for some way to stop the bloodshed. But the only chance to achieve even the most basic cease-fire will be with some agreement that revives for Palestinians at least a glimmer of their virtually extinguished hopes to someday live in a Palestinian state. That was the message of the former Palestinian prime minister, Dr. Salam Fayyad, July 31 at the Atlantic Council.

Gaza’s explosion into war comes in the fifteenth summer since the unfulfilled 1999 deadline in the Oslo Accords for a settlement of Palestinians’ aspiration for statehood, among other outstanding issues. Since the passing of that deadline, Palestinians have seen their hopes for statehood dwindle as Israel has backed away from the idea of permitting a Palestinian state in Gaza and the West Bank. A “vicious cycle” of mounting frustration with the unresolved conflict has led to the current “pathological state of Israeli-Palestinian relations,” Fayyad said.

Fayyad, an economist who served from 2007 until last year as prime minister of the Palestinian Authority, was appointed last week to serve as distinguished statesman at the Council’s Brent Scowcroft Center for International Security. The Scowcroft Center also includes Israel’s former ambassador to the United States, Michael Oren, as its diplomat-in-residence.

Fayyad indicated two steps to help create the conditions to break the conflict’s “vicious cycle” and restore hope of real peace-making for the first time in nearly a generation.

Palestinians must build a national consensus and re-unify their government. Fayyad said the Palestine Liberation Organization, which dominates the West Bank, and the Hamas movement, which governs Gaza, must with other factions “operationalize” their moribund “unified leadership framework” to offer truly national guidance to the PLO, notably on its future contacts with Israel. While the formal structures left over from the Oslo peace process make the PLO the official negotiator with Israel, the organization for years has lost real political authority to Hamas and thus now must establish a consensus with it on any future talks with Israel, Fayyad said. Ultimately, the Palestinians must work toward holding new elections for a unified government, something it lost in 2007 after Hamas swept elections in Gaza and established autonomous rule there.

The international community must re-affirm its expectation that Israel ultimately will permit a Palestinian state in the West Bank and Gaza. A reunified Palestinian government, eventually able to address Israel and the world with one voice, should seek the restoration of what failed with the expiry of the Oslo timeline fifteen years ago, Fayyad said. That is, the “setting of a date certain for ending the Israeli occupation and moving to resolve all outstanding issues.” Critical to that effort is “a fundamental adjustment on the part of the international community,” he said. Governments should recognize that Israeli insistence on excluding “non-PLO factions [from dialogue on the region’s future] is virtually certain to continue to lead to failure.” And, he said, the international community should reverse an erosion in the broad expectation, at the time of the Oslo Accords, that Israel would accept a Palestinian state in Gaza and the West Bank.

Fayyad cited a statement by Israeli Prime Minister Benjamin Netanyahu in a July 11 news conference that “I think the Israeli people understand now what I always say: that there cannot be a situation, under any agreement, in which we relinquish control of the territory west of the River Jordan.”

That rejection of any Palestinian sovereignty in the West Bank tells “the whole story,” Fayyad said.