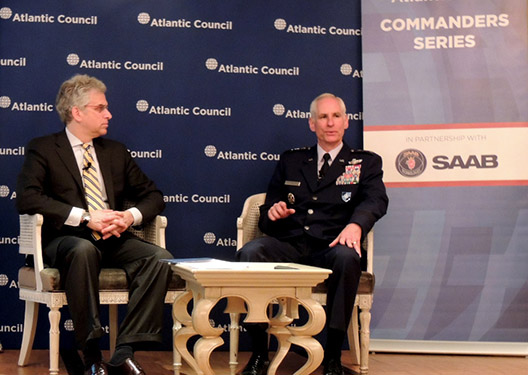 Faced with a coercive Russia, declining defense resources, and additional contingencies in Europe’s east, how can NATO plan, deter against, and form a strategy to deal with these and other challenges? What does the future of NATO look like as it looks to adapt to face the challenges of individual empowerment and other global trends? On May 6, 2014, Lieutenant General Mark O. Schissler, deputy chairman of the NATO Military Committee, addressed an audience on NATO’s role in dealing with Ukraine and preparing for the future.

General Schissler began his presentation by painting a general picture on what NATO has been doing. These actions include air policing in the Baltics and Balkans, stabilizing missions in Western Balkans and Kosovo, countering terrorism in the Mediterranean Sea, refocusing ISAF’s Mission in Afghanistan, and defending the population in southern and eastern Turkey with Patriot missiles. Schissler rebutted the idea that NATO was too expansive and distracted by operations in areas beyond Europe and North America by saying “yes, NATO can do more than one thing at a time.” He stated that those operations brought in various contacts and increased NATO’s operational capabilities with countries which would have never worked with NATO otherwise.

When talking about the Ukraine crisis, Schissler went as far back as the reset. He claimed that Russia had a longer-term view of the reset than did the United States. NATO cannot only think about immediate events—it must look farther down the road to see end goals. NATO’s end goal, which should drive all of its actions, aims to create a Europe whole, free, and at peace. When asked about Russia’s possible incursion into the Baltic region, Schissler claimed that NATO states would come to the aid of allies; Ukraine, because it is not an ally, is a different situation. To defend the Baltic, it would take complete “air, ground, and sea” capabilities to ensure success.

Looking forward, Schissler highlighted the importance of revamping the transatlantic alliance to advance NATO’s mission. “The transatlantic link is under renovation. We are all about re-appreciating how important the bond between North America and Europe is.” A mission with broad participation among NATO members would send a strong signal to deter the enemy. “I would rather have four operations supported by several countries than five operations done only by the United States.”

Schissler expressed great expectations for the upcoming NATO Summit in Wales. He thought it would be an opportunity to discuss issues related to cyber policies, Ukraine, and NATO’s future strategy.

The discussion with Lt. Gen. Schissler was hosted as part of the Commanders Series, which is sponsored by SAAB Americas and is the preeminent platform for military leaders to discuss strategic issues with an audience drawn from the broader Washington policy community. Recent Commanders Series events included US Marine Corps Commandant James F. Amos, US Army Chief of Staff Gen. Raymond T. Odierno, and Afghanistan’s RC-Southwest Commander MajGen John A. Toolan.