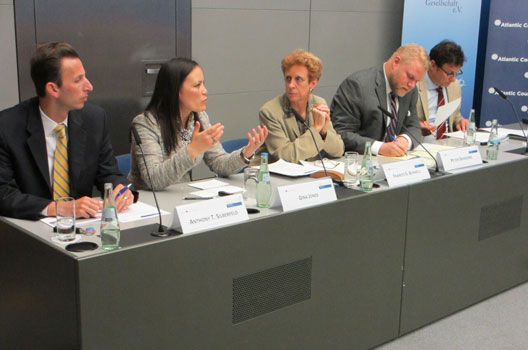 On June 9, Deutsche Atlantische Gesellschaft (German Atlantic Association), hosted the release of the Brent Scowcroft Center on International Security’s new report “Through a New Prism: A Next Generation Strategy for the US-German Relationship” at the German Federal Press Office in Berlin. The report, which twelve young Americans and Germans wrote in a little more than six weeks, calls for “less mistrust and less indifference” in the US-German relationship, for “more care, more investment…greater rhetorical restraint [and] a change in perspective.” “Through a New Prism” incorporates eighteen recommendations in a range of issue areas including economics, defense, migration, diplomacy, intelligence, the media, technology, cultural exchange and language study. It represents the culmination of the Next Generation Project the Scowcroft Center launched in February 2015 to develop practical recommendations for strengthening the US-German relationship.

The Bertelsmann Foundation and the Konrad Adenauer Stiftung served as co-hosts.

A German version of the report will be released in the coming weeks.