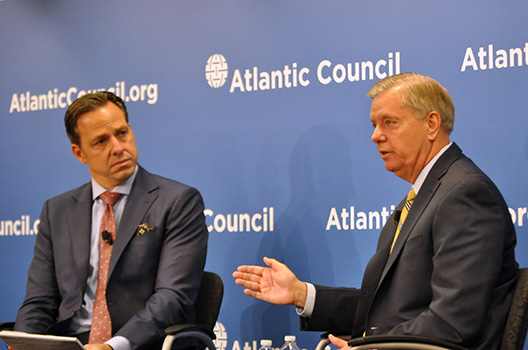 On July 8th, 2015, Senator Lindsey Graham (R-NC) gave his first major foreign policy speech as a presidential candidate as part of the Atlantic Council’s “America’s Role in the World” series. A moderated discussion with CNN’s Jake Tapper followed his speech.

Senator Graham spoke about US foreign policy around the globe, but focused largely on the Middle East, detailing what US involvement in the region would look like if he were elected president. As Commander-in-Chief, Graham would increase the number of troops the US has in Iraq and would send troops into Syria. While President Assad, he said, “must go”, the United States currently has no strategy that would lead to his departure. The Senator also emphasized the need to form a comprehensive strategy to fight ISIS, a challenge he feels President Obama has failed at overcoming. With regard to Iran, Graham said that he would reject any deal that would trigger a nuclear arms race in the region.

Senator Graham spoke briefly about China, whose rise does not have to be conflictual if the country plays fair. He also discussed the Russia-Ukraine conflict, supporting the provision of defensive weapons to Ukraine’s military. Lastly, he covered immigration, criticizing presidential-hopeful Donald Trump’s remarks on the issue.

Senator Graham’s speech was the first installment of the Strategy Initiative’s “America’s Role in the Wolrd” series, for which all presidential candidates have been invited to speak.