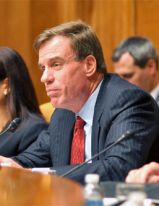 After several years in which the Defense Department has struggled with continuing resolutions and budget uncertainty, Russia’s invasion of Ukraine has highlighted the interplay of such budget battles — particularly over defense — and geopolitical developments. US Senator Mark Warner (D-VA) spoke on this intersection of America’s domestic politics and its international power at an Atlantic Council event co-hosted by the National Defense Industrial Association.

Concerning the crisis in Eastern Europe, Senator Warner emphasized the importance of strong US economic, moral, and military leadership. Strong budgets are an important factor, he said, invoking the budget’s role in maintaining economic and military capabilities vital to American power and prestige. In Ukraine, he told listeners, we “are seeing in effect…with the exception of the breakup of Yugoslavia, one of the first crossings of the territorial integrity of a European nation since the Second World War. It’s the most extraordinary geopolitical situation we’ve seen.”

Senator Warner, an Atlantic Council board director, discussed Russia’s motives in Ukraine and beyond, saying that Moscow’s energy exports are central to its foreign policy. The government of President Vladimir Putin uses Europe’s dependence on Russian energy supplies as a lever of influence over European states. Senator Warner outlined five actions the United States should take to counter that Russian tactic and strengthen the US relationship with Ukraine:

In response to a question, Senator Warner spoke of the importance of offering US gas exports to Europe. He stated:

There are certain American companies who have argued quite strenuously that we have to keep our gas here, maintain an artificially low price. I believe in the market, I believe [gas exports] would help actually increase American jobs and security, allow us to open up other markets that may lead to further trade opportunities. I think they need to move quicker.[…]  I would urge the president to go ahead and approve the Keystone pipeline within this timeframe as well. Not directly related, but [it] would seem to me to send a strong signal that the dramatic transformation, probably the single most dramatic transformation economically, has been the fact that the view of North America as an energy producer has changed so radically and we need to take advantage of that and build that into our security framework.

Turning to the Pentagon’s budget, Senator Warner said the US needs a strong military, which requires strong defense and domestic budgets. The automatic spending cuts under budget sequestration threaten to harm the US ability to be a global, stabilizing power, which it needs to be, he said. Further reforms to America’s finances must be made in order to run the federal government more efficiently, he added, citing entitlement and tax reform as means to better balance the budget.

Throughout the hour, Senator Warner called for bipartisan approaches and solutions to the country’s problems in order to ensure American strength at home and abroad.