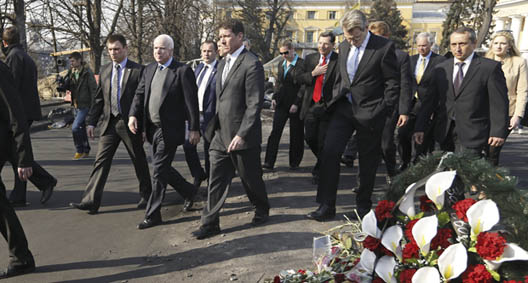 US Senate leaders John McCain [R-AZ] and Dick Durbin [D-IL] urged Congress to pass quickly – within a week – strong economic sanctions against Russia for its armed seizure of Crimea from Ukraine. In a conference call hosted by the Atlantic Council with journalists and council members, Durbin and McCain, both members of the Senate Foreign Relations Committee, spoke after visiting Kyiv last week. They underscored that their parties, so consistently at loggerheads on other issues, should join to immediately approve sanctions, which stalled in the Senate this month over Republican objections to an associated plan to expand lending by the International Monetary Fund.

“The next few days are very critical,” in deterring any additional military moves by Russian President Vladimir Putin, said McCain. Putin invaded Crimea “because of his vision of the Russian empire that the old KGB colonel still aspires to” revive. Russia claims a right to protect ethnic Russians that it determines are under threat in other former Soviet states. With its troops occupying parts of Georgia and Moldova, and mobilized on the border of heavily russified eastern Ukraine, “I think that what he does now is going to be directly related to what he thinks the penalty is,” McCain said, “not only as far as eastern Ukraine, but also Moldova, Transnistria, there are even pressures on the Baltics [Lithuania, Latvia and Estonia]. … The situation there is incredibly tense.”

McCain criticized what he said have been slow responses to the Ukraine crisis both by President Obama and by legislators of his own party who blocked this month’s first effort to sanction Russia. McCain said he could understand Republicans’ concerns over provisions in that initial bill related to the IMF, “but to allow that to be a reason not to move forward after Ukraine has been the [victim] of a military invasion is almost incredible to me,” he said.

Durbin, the Senate’s assistant majority leader, said the power of economic measures against Russia already is visible. “As soon as we made it clear that we were going to resist his aggression in Crimea, there was a 10 to 15 percent drop in the Russian stock market,” he said. “That precipitated this rambling Putin press conference in which he assured the world that he was not going to go too far. I think he can feel the pain in his own economy when we stand together,” Durbin said. “We have to be front and center with this. … Let’s get this [sanctions] resolution passed next week.”  He added: “I hope our European allies see that some type of economic sanctions are essential if we’re going to stop this aggression.”

Both senators acknowledged that sanctions will hurt US and European companies with investments – notably in gas and oil production – in Russia. And they said Europe’s national economies, already flat, would suffer painful costs. “I don’t think this is without cost to American and European business,” said McCain. “I’m very much concerned about that. But what are the options?  Do nothing and thereby … give him [Putin] a blank check?”

McCain laid out a five steps, beyond sanctions, that the United States should take. Durbin said that, while he would “raise a question or two” about some of them, he agreed with many. McCain’s suggestions were these:

“I don’t believe in gradualism” in the US response, McCain said. The Obama administration’s sanction strategy so far, against a gradually rising number of individual allies or aides of Putin, “probably deserves the ridicule that the Russians gave it,” he said. “I think we need a package of very strong measures … but it requires presidential leadership.” McCain criticized

Durbin recalled the visit that he, McCain and other senators made to Kyiv’s Maidan Nezalezhnosti, the main city square, where hundreds of thousands of Ukrainians protested corruption and authoritarianism and a closer Ukrainian relationship with Europe. The visit strengthened his own desire to see the United States support Ukrainians’ struggle to build a more democratic society and government, he said. “In this square over the last several months the seeds of change were sown at the expense of 103 innocent lives, people killed for speaking out for change in their government,” Durbin said. “When you enter the Rada, the parliament, there, they have a shrine, with pictures of each one of those victims. You can understand that this is more than just a political debate.”