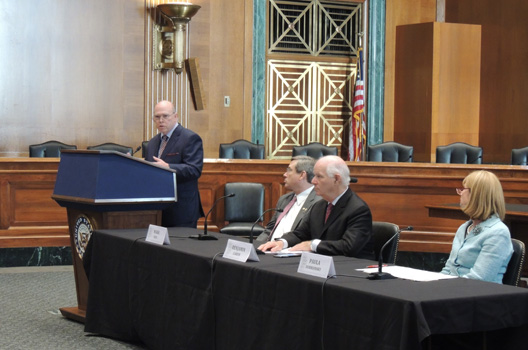 On June 24, 2015, the Brent Scowcroft Center on International Security launched a report titled Shaping the Asia-Pacific Future: Strengthening the Institutional Architecture for an Open, Rules-Based Economic Order. The report was co-written by Olin Wethington, former Assistant Secretary of Treasury and Nonresident Fellow at the Scowcroft Center and Robert A. Manning, Senior Fellow at the Scowcroft Center. The report launch featured opening remarks by Senator Benjamin L. Cardin (D-Md.), Ranking Member of the Senate Foreign Relations Committee and Senator Mark S. Kirk (R-Ill.), Chairman of the Subcommittee on National Security and International Trade and Finance in the Senate Committee on Banking, Housing, and Urban Affairs.

The report makes the case that the goal of American economic policy in the Asia-Pacific region should remain an open, inclusive, market-oriented and rules-based order. The United States should not back away, despite challenges and rising powers. The report concludes that this objective can be achieved only if the US exerts a more pro-active leadership in Asia that goes beyond present levels of commitment. It outlines a set of recommendations for US policy that it hopes will stimulate further thinking.

Senator Cardin expressed his agreement that Asia needs to be a priority to the United States. The United States is a Pacific nation and needs to remain engaged with Asia due to the fact that there is a projected economic growth of twenty-six trillion dollars within the next five years, most of which will happen in Asia. With China as a rising power, the island disputes in the South China Sea, and the constant threat of North Korea, the United States needs to actively engage with Asia, remain true to its principles while continue an expansion of its economic front while also assist with political stability in Asia. Senator Kirk focused his remarks on the increasing trade between Illinois and China. With increasing numbers of Americans and Chinese learning Mandarin and English respectively, and also a rising number of Chinese students in public schools and universities in the United States, it indicates that much of the future will be written in Asia.

The Senators’ remarks were followed by Mr. Wethington and Mr. Manning who provided a brief report representation and summary of the recommendations. Much of the question and answer session was focused on the Trans-Pacific Partnership, rule of law and democratic governance, the sustainment of a liberal global order, way to conduct better economic statecraft, and other aspects that need to be achieved in the shaping of the future of the Asia-Pacific.

This Atlantic Council report launch is part of the Project on Shaping the Asia-Pacific Future, which seeks to formulate practical policy recommendations related to some of the most pressing requirements for long-term security and prosperity in the region.