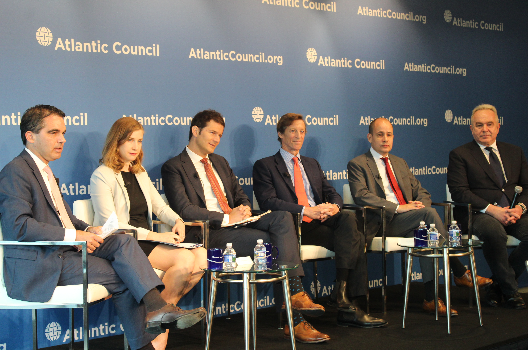 On Thursday, June 6, the Atlantic Council’s Adrienne Arsht Latin America Center partnered with its Global Business and Economics Program and Baker McKenzie to discuss the recent trends in Chinese foreign direct investment (FDI) in North America and Europe. The event marked the launch of Baker McKenzie’s latest report, Chinese FDI: A New Reality. Driven by regulatory changes, Chinese foreign direct investment flows into North America and Europe dropped by $80 billion last year to $30 billion. The discussion focused on assessing what drove this decline and in what ways did US-China trade tensions play into FDI dynamics.

Kurt Campbell, chairman and chief executive officer of The Asia Group and former assistant secretary of state for East Asian and Pacific affairs kicked off the conversation. His opening remarks emphasized America’s changing role in the global order and the importance of thinking strategically about the US relationship with China during this key time of transition. He said that “we are at the very beginning of this set of very contentious interactions between the United States and China” with only a few people who understand the profound challenges in the Asia Pacific region moving forward and states that the current policies in place must be reassessed.

Jason Marczak, director of the Adrienne Arsht Latin America Center, moderated the conversation on what changes drove the significant decline in Chinese FDI flows in recent years. Thilo Hanemann, partner at the Rhodium Group and senior policy fellow at the Mercator Institute for China Studies, attributed the rapid decline in Chinese investment in North America to Chinese capital controls that began in 2016. He argued that this sparked a series of reprisals between China and the US in the form of increased regulation and tariffs. Others agreed that domestic politics will continue to play a large role in triggering disinvestment and limiting the progress in bilateral trade talks.

Ana Swanson, correspondent for trade and international economics for The New York Times, stated that tariffs and changes in Chinese domestic law would also be the primary obstacles in the next round of bilateral talks. Regarding political will for compromise, Swanson stated that President Trump has made it clear that the appearance of “staying on top of China” will be beneficial for him going into the presidential election in 2020. She also mentioned a shift in Chinese perception of them not being as welcomed by Americans, stating that “the story of declining Chinese outbound investment is mostly a regulatory story, with pressures from the Chinese government, but soft power factors—especially with regard to US—are also playing a role.”

Bart Oosterveld, C. Boyden Gray Fellow on global finance and growth and director of the Global Business and Economics program at the Atlantic Council echoed Swanson’s sentiment that there does not appear to be a will to reach an agreement as he spoke to the reaction from the business community and financial markets to these rising economic tensions between the US and China. Oosterveld said there has been a “surprising silence” in response to the current situation.

Rod Hunter, partner at Baker McKenzie and former senior director for international economics at the US National Security Council, spoke about global spillovers of US and China trade tensions and the move by private companies to develop technology outside of highly regulated environments like the United States. Swanson elaborated on the spillover into countries like Vietnam and Australia but noted that no country is truly a safe harbor for investments, mentioning the then-proposed tariffs on Mexico. Although this may appear unique to this current administration, Hunter pointed out that “this is not just a Trump administration phenomenon. US presidents have had broad authority to intervene in FDI since 1988. It’s a long story that has continued across administrations.” This provided the discussion with important perspective on approaching this instance of increased regulations on investment in the United States.

To conclude, Campbell ended the discussion with a call to pay special attention to political shifts during this coming election year in the United States and how they may affect the changing dynamics in the global political and economic order.