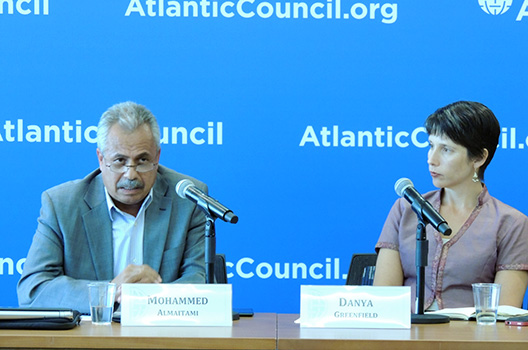 Almaitami cited a number of actors influencing Yemen’s transition process, including the military, tribal leaders, politicians, and the international community. Almaitami confessed that the GCC initiative adopted in 2011 was an elite bargain and suggested there are clear signs that it is deteriorating. Almaitami also noted that as the general economic climate continues to worsen, the government has been unable to address fuel shortages and food insecurity. To quell the people’s frustration moving forward, Almaitami stressed that the government must devise and implement an open communication strategy.

Almaitami also noted the ongoing power struggle and shifting allegiances among major political and tribal factions that threaten to reverse the gains made through the National Dialogue Conference (NDC). Although the NDC produced an agreement to transition to a federalist state, Houthis and many Southerners were not satisfied with this or other outcomes of the NDC. To address these divisions among Yemenis, Almaitami suggested that the government make honest overtures to include all factions, not just the elites, in the political process.

Regarding the international community’s role in Yemen’s internal politics, Almaitami argued that interference from large aid donors is impeding progress on the political front. On the other hand, he acknowledged the international community’s successful and much-needed efforts to assist in the country’s development. Almaitami concluded that public frustration over lifting fuel subsidies, Houthi expansion in the north, divisions among the Northerners and Southerners, and the slow progress in constitution drafting all underscore the need for a more inclusive political process in Yemen.