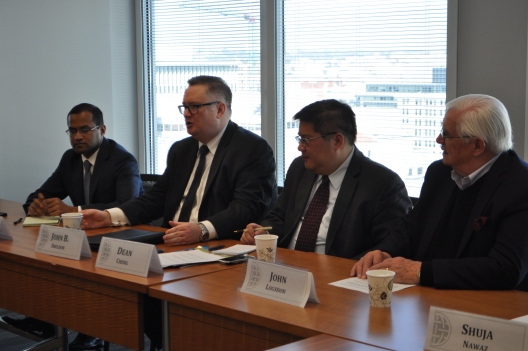 On October 29, 2013 the South Asia Center hosted a vibrant discussion about India’s space aspirations, upcoming plans, and the implications of regional compeition for Indian space exploration. Although space exploration is often viewed in a global context, India’s space advances are best viewed context of the geopolitical climate of the Asia-Pacific region.

The panel was moderated by John Logsdon, professor emeritus at George Washington University.  Dean Cheng, senior research fellow at the Heritage Foundation, focused his remarks on China’s space program. Mr. Cheng noted that China is not in direct competition with other countries per se, but that it has expressed a keen interest in what other countries are doing. According to Mr. Cheng, China sees space supremacy as a key factor in future wars, and this is expressed through the fact that the Chinese military has a paramount role in China’s space program.

John Sheldon, principal and senior consultant at the Torridon Group, focused on India’s evolving space program. Mr. Sheldon mentioned that India shifted its space focus in 2006 from technology with social and economic applications towards outright space exploration. He argued that this shift is not simply a cynical ploy to one-up China, although that is part of the calculation, but that there is a serious scientific roadmap. Bharath Gopalaswamy, deputy director of the Atlantic Council’s South Asia Center, provided a broader context for India’s calculations regarding space. Dr. Gopalaswamy discussed the historical context of India’s space program, and broke the current program into three parts: space science and exploration, space applications, and space security. India’s primary focus in the short to medium term will likely remain space applications.

The panelists concurred that while there is definite competition in various areas of space technology, particularly between China and India, it should not be characterized as a “race.” Both India and China have their own goals and plans regarding the future of the space programs, which cannot be reduced to the metaphor of the Soviet-US arms race in the 1950s and 1960s.