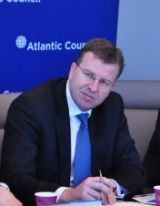 The upcoming year will prove to be pivotal for NATO, as the 2014 Summit to be held September 4-5 in Newport, Wales has the potential to usher in a new chapter in the Alliance and as NATO members draw down from the ISAF mission in Afghanistan. Against this backdrop, Ambassador Kasper Høeg-Jensen, director of the Private Office of the NATO Secretary General, joined the Atlantic Council for an off-the-record strategy session focused on the future of NATO.

Ambassador Høeg-Jensen is a Danish diplomat who previously served at the Danish Mission to NATO in 1997. This was followed by six years in the Danish Prime Minister’s Office, where he served first as senior foreign policy adviser and later as the head of the private office under the current Secretary General, Anders Fogh Rasmussen, and later his successor Lars Løkke Rasmussen. In 2009, Ambassador Høeg-Jensen was appointed Minister and Deputy Head of Mission at the Royal Danish Embassy to the United Kingdom in London.