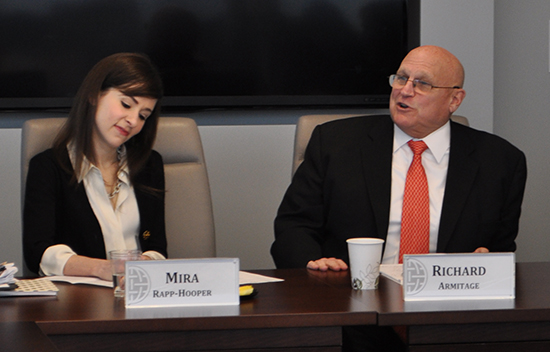 On February 26, 2014, the Atlantic Council’s Brent Scowcroft Center on International Security held a not-for-attribution roundtable briefing on the US-Japan alliance and what it portends for US extended deterrence in Asia. The briefing featured Mira Rapp-Hooper, Stanton nuclear security fellow at the Council on Foreign Relations, and was presided over by project co-chair Richard Armitage, president, Armitage International.

The discussion focused on threat perceptions from Japanese officials, the uptick in national security preoccupation in Japan, US interests in the Asia-Pacific, and specific facets of the US-Japan relationship. Participants analyzed the capabilities gap between Japanese and American forces, especially in high- or low-level conflicts, and examined the political challenges pertaining to Article 9 of Japan’s Constitution–which outlaws war as a means to settle disputes–and the redefinition it would require, causes planning issues between the two allies. The discussion also focused on steps Japan and the United States can take to overcome these issues to strengthen the alliance which forms a major component of US extended deterrence in the region.

The briefing took place as part of the Atlantic Council’s project “Strengthening US Extended Deterrence in East Asia,” which is funded by the MacArthur Foundation to study the credibility and effectiveness of US extended deterrence in the region’s dynamic strategic environment.