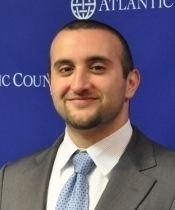 After a nearly three year conflict, at least 115,000 killed and millions displaced, the Syrian civil war rages, pitting the regime of President Bashar al-Assad against a fragmented armed opposition including the Free Syrian Army (FSA) and others who oppose his rule. Over the last year, the makeup of this armed opposition has shifted to include foreign fighters, Kurdish separatist fighters, and groups with a transnational jihadist agenda. On October 25, the Atlantic Council hosted a roundtable discussion with representatives of Syrian opposition groups to examine the current state of Syria’s armed opposition. Fellow Faysal Itani moderated the discussion, which explored current dynamics on the ground in Syria and US policy options for countering the ascent of extremist groups.

The first speaker, a representative of the Syrian Support Group (SSG), a US organization licensed to provide nonlethal and financial support to the FSA, began with observations from a recent stay in Turkey and Syria alongside the rebel leadership. The speaker reflected that although morale remains remarkably high, the opposition finds itself at a critical juncture fighting in a three-front war, with moderate rebels engaging in open warfare against extremist groups, including Jabhat al-Nusra and the Islamic State of Iraq and the Levant, who arrived under the guise of aiding the fight against the Assad regime. The speaker added that the United States now has an opportunity, albeit one with a short window of time, to empower this coordinated moderate element and prevent al-Qaeda linked extremist groups from securing a safe haven in northern Syria.

The second speaker, a representative for the National Coalition of Syrian Revolution and Opposition Forces, a political umbrella organization representing the Syrian opposition, addressed the planned Geneva II meeting to form a transitional governing body. The speaker reinforced some of the opposition’s prerequisites for participation in the convention—that Assad and his regime play no role in a future government, that Iran and Hezbollah withdraw troops from Syria, and that Iran is not included as a mediating party (owing to the presence of Iranian troops in Syria supporting the regime). The ensuing discussion touched on the impact of foreign fighters on the Syrian conflict, the possibility of divisions among the opposition over attending the Geneva II conference, and the makeup of an election or referendum mechanism that the opposition would deem acceptable.