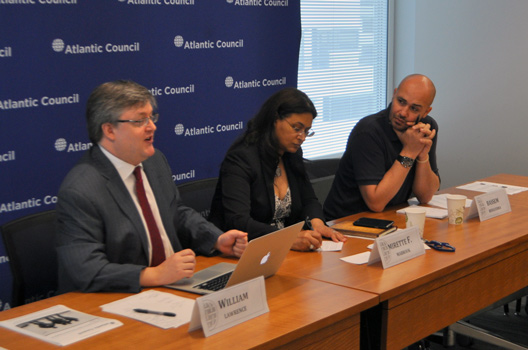 Security sector reform (SSR) was a major demand of the Arab uprisings of 2011. And yet, three years later, little progress has been made toward SSR in these countries. On Tuesday, June 10, 2014, the Atlantic Council’s Rafik Hariri Center for the Middle East hosted Hariri Center Nonresident Fellow Bassem Bouguerra and George Washington University Visiting Professor William Lawrence to discuss the obstacles to Tunisia’s security sector reform and their recommendations moving forward. Hariri Center Deputy Director Mirette F. Mabrouk moderated the discussion.


Bouguerra began with a brief overview of the security situation in Tunisia following the events of 2011. In his assessment, a severely shaken public perception of strong security institutions, general amnesty for many political prisoners, regional instability, and the dissolution of any effective intelligence analysis body (the “political police”) have converged to create a deeply insecure and volatile state of affairs. Tunisia urgently needs SSR, but, while there is demand for it by many different actors, there is little agreement about the goals of reform and which ought to be undertaken. There is currently no large-scale reform project, and Bouguerra sees no political will on the part of the public or decision-makers for a truly democratic SSR. Agreeing that there is a vital connection between democratization and successful SSR, Bouguerra and Lawrence call for a system of democratic oversight for security institutions. Lawrence further adds that justice reform and SSR must move forward hand-in-hand. It is necessary to create a security institution that is integrated in local communities, and in which the community and the police force are accountable to and invested in one another. Bouguerra and Lawrence highlighted the need for committed leadership, international donor engagement with civil society, and a greater focus on security governance training rather than “train and equip” programs exclusively. Additionally, Bouguerra noted that if the presidential elections occur first—and guarantees are not made for the losing party—SSR is unlikely to gain much traction within a single party government.

The roundtable convened over thirty governmental and non-governmental personnel, both Tunisia watchers and SSR experts alike, in anticipation of Bouguerra’s forthcoming issue brief on the subject of SSR in the North African country.