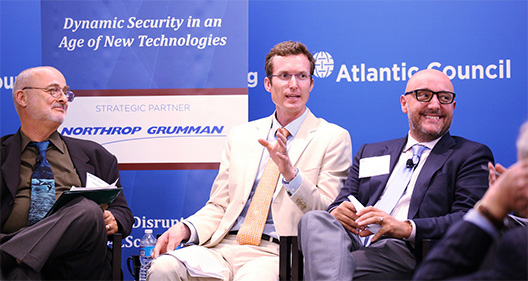 The creative minds of David Brin, renowned tech-futurist; August Cole, adjunct fellow at the American Security Project; and Dave Anthony, director and writer of Call of Duty: Black Ops II; along with moderator Steven Grundman, the M.A. and George Lund Fellow for Emerging Defense Challenges in the Brent Scowcroft Center on International Security at the Atlantic Council, wrapped the day’s discussion on disruptive technology with an engaging discussion on how to think outside the box on issues of national strategy.  The trio is an unusual panel at a DC think tank: they are futurists, fiction writers, and DC outsiders.  In fact, Dave Anthony admitted to having never even been to the Washington, DC area. Why would the Atlantic Council bring writers and artists to a defense policy conference?  Each panelist has his own take on why, but their answers also had a common denominator: they bring a perspective that is different, and they have a personal concern for the continued success of the nation.

As it turns out, modern video game producers have much in common with government program managers and those whose job it is to anticipate fissures in national security. According to Anthony, in the 1970s, one video game-maker would sit in front of a computer for a few days and could produce a simple but popular video game like Pac-Man. Today, it takes five hundred people working for two years with a $200 million dollar budget to produce a modern video game. That group is not only comprises coders, but also experts and futurists who give the game a feeling of reality despite being set in a future world. Grundman noted that, ironically, the Call of Duty team may have spent more time and money envisioning future warfare than the Pentagon. The goal of the Call of Duty team, Anthony tells us, was to make the game feel real, feel like a plausible future, and therefore required a great deal of thought for the creation of the scenario, imagery, and weaponry. In this future, war is no longer rows of guys slaughtering each other on the battlefield.  He uses the example of David and Goliath: the stronger you become, the more vulnerable you may be. In Call of Duty they asked, “What if your own technology starts to be used against you?” In Call of Duty: Black Ops II, the antagonist is a criminal who has used social media to influence hackers to gain control of US drone fleets but done in a way that made China look suspect. When all is revealed, a US general officer in the game confronted with the question of how this criminal with few weapons will be able to defeat the United States answers, “He doesn’t need his own weapons, he’s got ours.”

While the video game ignores some trends in warfare and is designed to be exciting and engrossing, it touches on topics that early panelist discussed: Technology is not the sole domain of the well resourced and powerful.  Technology is accessible and the person or entity that can use it in the most creative manner will have the advantage.

Anthony, comparing the Call of Duty franchise to the US military, stated, “both are the most power in their field.” They both face numerous threats and have a hard time countering and acknowledging them all. But developing a proactive strategy is possible while countering pop-up threats.  He also understands the difficulty of confronting major changes. His publishers are risk-averse, adopting the mindset of “why change if it is working?” His answer is that it needs to change to survive. “Why leverage an artist or people outside of the bubble?” he asks. Because they come with outside the box solutions but, they are also analytic and find generalized solutions.

August Cole, a history major, journalist, and fiction writer on topics of national security, continues the theme of how to leverage the creative types in finding solutions to national security questions. He says that the world is moving faster than the Department of Defense can keep up with, but this rapidly changing environment is great for writers. Science-fiction writers are useful because they can afford to be wrong as long as they make it interesting.  Therefore, they can take more risks and tackle more diverse concepts. “Creativity is on the way to becoming a bad word in this town,” Cole says. It is increasingly being tied to ways to save money. Writers have the ability to tackle difficult subjects and become more relevant as you move further off into the future.

Brin closed the panel by reminding us of the importance of involving not just artists, writers, and creative types, but also actively involving citizens.  Brin stated, “the attack on the US ended and was won on the morning that it started when the citizens aboard flight 93 rose up against those who took control of the fight.” He went on to say that while the United States has been outstanding in working to anticipate the next war, there will always be a surprise. Only through empowerment of the citizen will the next surprise attack be defeated.

This excellent panel closed with a question from the audience. John Hanacek, noting an underlying theme of diffusion of technology and potential for nefarious use countered by the use of that technology for good, asked, “what message should America be sending?” In a sense, what is the brand that the world wants to embrace that is counter to those that would use technology for purposes of malfeasance? The answer from all the panelist was the same. The United States is a place where citizens have a voice, where ideas can come to flourish, and that accountability is on the rise


US Marine Corps Senior Fellow Mark Revor provides a few summary thoughts on “The Art of War” the final panel at the Disrupting Defense: Dynamic Security in an Age of New Technologies conference.