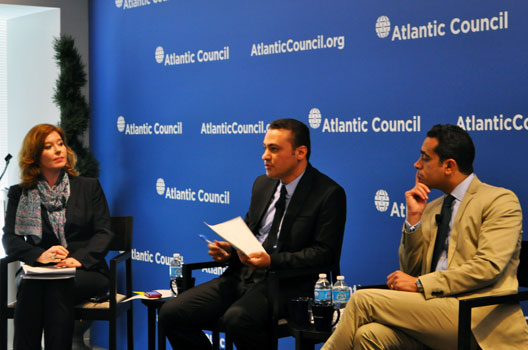 Egypt has remained without an elected president since last July 3, when its military removed former president Mohamed Morsi from office amid widespread popular demonstrations. Former defense minister Abdel Fattah al-Sisi, who led Morsi’s ouster and initially denied presidential ambitions, announced his candidacy on March 27 and is expected to soundly defeat his sole opponent, Nasserist Hamdeen Sabbahi, in the May 26-27 polls. On May 15, the Atlantic Council hosted a panel discussion on the upcoming vote and what it means for Egypt’s near-term future. Amy Hawthorne, a senior fellow at the Atlantic Council’s Rafik Hariri Center for the Middle East, moderated an expert discussion among Yussef Auf, an Egyptian judge and nonresident fellow at the Atlantic Council, Michael Hanna, senior fellow at The Century Foundation, and H.A. Hellyer, nonresident fellow at The Brookings Institution.

Hawthorne opened the panel by describing the election as void of actual competition, with repression and exclusion at unprecedented levels and with the state, especially the military, backing al-Sisi’s run, but noted that al-Sisi does have support among many Egyptians yearning for greater stability. Even when elections are deeply flawed they are worth analyzing as they reveal much about a country. Hellyer then discussed public opinion, stating that support for al-Sisi should not be surprising. Adding caveats about the difficulties of conducting accurate polling in Egypt, Hellyer observed that prior to Morsi’s removal, some polls showed that some 90 percent of Egyptians saw the military as the strongest political institution. Since then, that support has waned only slightly—Hellyer believes it is now around 75-80 percent. This reflects a growing trend in Egypt that prioritizes stability over the post-2011 “democratic experiment,” as well as grassroots backing for the military. Hellyer gauged current support for the Muslim Brotherhood at no more than 15 percent, adding that a Brotherhood comeback is out of the question for the next 10 to 15 years because the group has alienated the public so severely. Hellyer noted that important networks of the former Mubarak regime are actively helping al-Sisi’s campaign, but may emerge as critics if al-Sisi has a short honeymoon. Hellyer assessed that if Sabbahi manages to garner even between 10 and 30 percent of the vote, this could help to build an opposition foundation.

Auf, speaking in his personal capacity and not representing any institution, outlined the legal and procedural framework for the election. He predicted “procedural integrity” in the conduct of the vote, which he said meant that when a voter casts her ballot, it will be counted accurately—this is an improvement over elections of the past. But owing to the bias toward al-Sisi existing in the media and state apparatuses and to the overall polarized political environment, the election will not be fair. Auf also discussed controversial Article 7 of the new presidential election law, which makes the electoral commission’s decisions immune from court challenges. In Auf’s opinion, one should be able to bring a challenge against the commission prior to the announcement of the final results, but not after that point, in order to avoid endless lawsuits that would undermine political stability. Auf closed by noting that despite his lack of a clear platform, al-Sisi has a chance to succeed once in office due to strong backing from the five most important institutions in Egypt—the military, the police, the media, state religious institutions, and the state bureaucracy—and because he himself comes from the heart of the Egyptian state.

Hanna expressed pessimism about the prospects for significant change after the election. He does not expect to see a major course correction following al-Sisi’s anticipated victory, but possibly only a slight dialing back of some repressive measures. He noted that this bleak outlook is rooted in the fractured nature of the Egyptian state, which is chaotic and at present not under any one person’s full control. Once al-Sisi takes office, Hanna said, the task of “stitching the state back together” will be “herculean.” Egypt needs urgent reforms in order to correct its political and economic course; otherwise, the country will continue its slow drift. Moreover, Hanna noted, al-Sisi will face criticism if he is unable to achieve progress. Yet, this will be difficult. The Egyptian military generally has eschewed decision-making; moreover, Hanna said, few people even know what al-Sisi thinks or exactly what he plans to do—for example, will he represent a state corporatist culture, or advocate for a free-market? Hanna remarked on the recent relative progress in the security situation, noting that “repression has had an effect,” but said it might not be sustainable. In summary, Hanna posited that after the election, Egypt’s short-term future will look much like its unstable present.