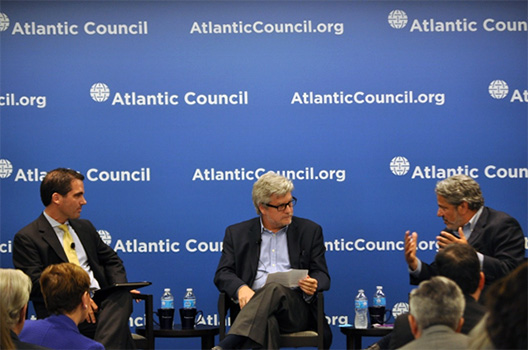 Silva and Schechter noted that the first round of presidential elections surprised many observers. Center-right presidential candidate Oscar Iván Zuluaga outperformed incumbent President Juan Manuel Santos in the polls by 3.6 percent, leading to a runoff election on Sunday, June 15. President Santos staked his presidency  and, consequently, his campaign – on advancing peace talks with the FARC rebels. With the support of former President Álvaro Uribe, Zuluaga has been critical of these efforts.

Silva started the discussion by presenting the polling numbers collected in the country and demonstrating how polarized Colombia is leading up to the run-off election. Silva also discussed the important task ahead for President Santos to connect the peace negotiations with top priorities of everyday Colombians (i.e. education, economic growth, and job creation) in order to gain greater public support. He also stressed that former President Uribe’s constant attacks have been detrimental to Santos’ ability to govern the country by distracting the president and putting him on the defensive.

Schechter discussed the vast differences between the two candidates and pointed to the lack of support for President Santos as a common phenomenon witnessed across the region where, with the growth of the middle class, incumbent presidents are having a challenging time winning reelection.

Both Silva and Schechter predicted that the race would be very close, but neither wanted to make a definitive call. This is the first time in Colombia’s history that a sitting President can run for reelection.