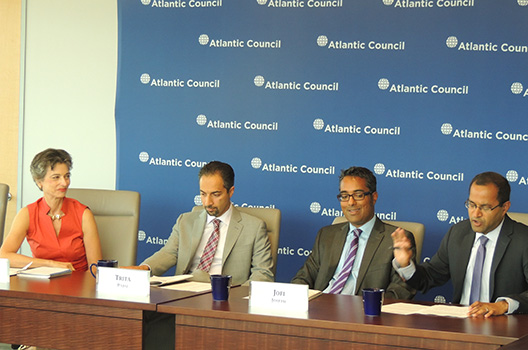 The five permanent members of the UN Security Council – United States, France, Russia, China and the UK – plus Germany are in a crucial moment in negotiations with Iran to reach a comprehensive agreement over its use of nuclear power. This group of countries, known as the P5+1, are adamant to ensure that Iran does not acquire a nuclear weapon and that the country’s nuclear program operates for peaceful purposes. The US delegation has called these talks “very tough but constructive.” Reaching a deal with Iran is of critical importance, according to two Iran experts Trita Parsi and Jofi Joseph, who spoke at a forum hosted by the Atlantic Council’s South Asia Center.

A Good Deal is Better Than No Deal

“A good deal is better than no deal with Iran,” noted Trita Parsi, president of the National Iranian American Council (NIAC). Presenting key findings from his policy memo, Parsi maintained that the consequences of no nuclear deal with Iran are ambiguous, leading to the assumption that not reaching a deal would lend to a continuation of the status quo before negotiations begin. A full cost-benefit analysis of reaching a comprehensive nuclear agreement must take into consideration the implications on Iran’s nuclear, military, and economic standing. However, Parsi argued a diplomatic failure will most likely result in a deterioration of the situation with severe consequences for all parties involved and especially Iran.

Parsi spoke of the critical achievements of the Joint Plan of Action (JPA) signed last November, under which Iran agreed to limit its nuclear program in return for some economic relief while nuclear negotiations continued. Jofi Joseph, former director for nonproliferation at the White House National Security Council, stressed the importance of reaching an agreement with Iran. He noted that the United States will not have another opportunity as open to diplomacy to address these issues, especially considering uncertainty about the next administration. He highlighted the unique aspects of the current negotiations that allow the international community to work swiftly – for instance the compliance of Iran’s new President Hassan Rouhani and the patience and readiness shown by the P5+1 delegates in negotiations. It is crucial to reach a good deal that is sustainable and unless this is reached in the next few months and diplomacy breaks down, we will be back to pre-November 2013 status quo.

The Consequences of No Nuclear Deal with Iran

Agreeing with Joseph, Parsi further stressed the severe implications of not reaching a deal with Iran, “Rather than reduce the threat of Iran’s nuclear program, the Iranians are likely to escalate their nuclear activities under no deal – and if attacked, an Iranian nuclear bomb will become a near-certainty.” This would lead to further consequences that would affect the United States adversely. He added, “The cost of a full-scale invasion and occupation of Iran – in the first three months alone – is estimated at $2.8 trillion.”

On the Iranian domestic front, Rouhani must show progress in the negotiations to avoid the political pendulum swinging back in favor of hardliners. Pro-democracy activists and human rights campaigners in Iran are anxious about their uncertain future. A collapse in current negotiations may spell the end for a diplomatic resolution, and will certainly arm proponents more aggressive approaches.

A good deal is a durable deal in which both sides receive enough to be able to defend themselves against their respective hardliners back home. The essence of diplomacy is to strike that compromise instead of maximizing one’s own gains, noted Parsi. Joseph added that a good deal is one in which the P5+1 exercises diplomacy and achieves its goal of ensuring that Iran’s nuclear program remains for peaceful purposes. A core issue at the Vienna talks also involves debate over the capacity of Iranian enrichment program. There are 9400 operating centrifuges and another 10,000 non-operating centrifuges. As talks move ahead, the P5+1 will have determine the future of these centrifuges among other issues.

In the days following the discussion, the Joint Plan of Action, originally scheduled to expire on July 20, 2014, was extended for four months to allow further negotiations.