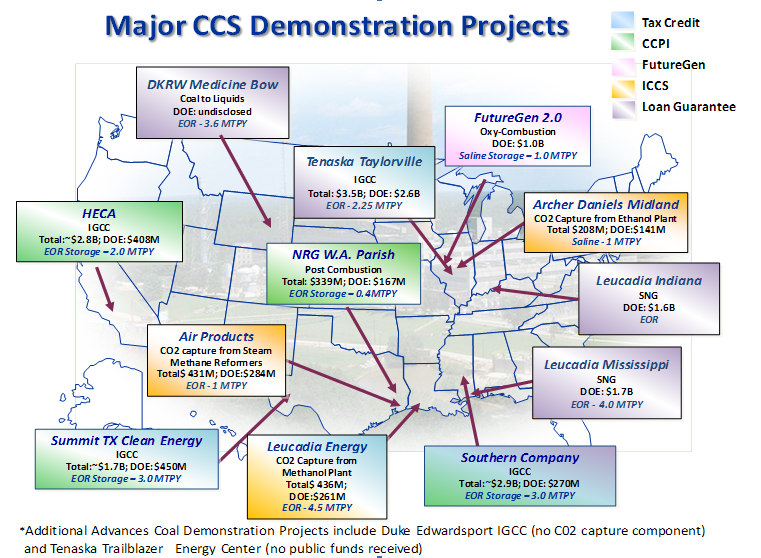 On June 20, the Atlantic Council’s Energy and Environment Program hosted the briefing, Can CO2 Capture Technologies Deliver for EOR and Climate Mitigation and at What Cost? The briefing, which featured Dr. Edward Rubin, Carnegie Mellon University’s Alumni Chair Professor of Environmental Engineering and Science, and Professor of Engineering and Public Policy, was the first in a series of Atlantic Council discussions and papers on the status and outlook for carbon capture, utilization and storage (CCUS).

Pamela Tomski, senior fellow with the Atlantic Council, provided an introduction and addressed the US policy shift from CCS – carbon capture and storage – to CCUS with the “U” for carbon dioxide (CO2) utilization. The primary use of CO2 is for enhanced oil recovery (EOR), a mature technology that uses CO2 to increase the viscosity and recovery rate in depleted oil reservoirs. From a climate perspective, there is not enough EOR capacity to store all the CO2 needed to meet potential reduction targets, but CO2 EOR offers a pragmatic market solution to advance CCUS technology in the near-term.

More than 115 CO2 EOR projects in the U.S. produce about 6% of total domestic oil output largely using naturally occurring CO2. The largest constraint to increased production is the lack of available, affordable CO2 supplies. A recent study by Advanced Resources International (ARI) estimates that use of captured CO2 emissions could enable EOR to provide up to 3 million barrels per day of domestic oil production by 2030, reducing oil imports by nearly 30%. In addition to enhanced energy security benefit and revenues to cash strapped governments, CO2 EOR has potential to advance CO2 capture technology and build out the necessary infrastructure for large-scale saline storage. (This issue was explored in more depth on July 26, at the Atlantic Council briefing with ARI’s Vello Kuuskraa and Michael Moore of the North American Carbon Capture and Storage Association.)

The policy shift from CCS to CCUS was driven by market dynamics for CO2 EOR, along with the economic downturn and failure of Congress to pass climate change legislation. With $3.4 billion in stimulus funding from the American Recovery and Reinvestment Act (AARA), 6 of the 8 large-scale integrated CCS projects in the U.S. Department of Energy’s portfolio involve CO2 EOR. (Figure)

Since last summer, DOE began recasting its CCS program as CCUS. Some of these initial policy shifts were articulated by Charles McConnell, Assistant Secretary of Fossil Energy, during his July 28th Senate confirmation hearing with discussion of how to move forward with CCS in the absence of climate legislation or a price on carbon. Mr. McConnell highlighted CO2 EOR as a possible strategy for increasing domestic oil production while storing CO2 in an economically viable manner; emphasizing the need for continued research and development (R&D) to drive down the cost of CO2 capture.

Dr. Edward Rubin’s presentation (PDF) first discussed recent estimates of U.S. oil production achievable using “best current” and “next generation” EOR technologies and their associated demands for CO2 supplies. Over the next decade or two, the lowest-cost sources of CO2 are natural deposits and industrial processes such as gas processing plants and refineries. After about 2030, however, “dilute sources” such as power plant flue gases are projected to supply the bulk of the CO2 needed for EOR. Dr. Rubin then reviewed the status of CO2 capture technologies, examined costing methods and assumptions used in CCS cost studies throughout the world, and discussed the outlook for advanced capture systems and challenges moving forward. Key questions addressed include: (1) how much performance improvement and cost reduction is expected from the CO2 capture technologies now under development? (2) when will these advanced technologies be available for commercial use? (More detail on these questions can be found in Dr. Rubin et al’s new paper, The outlook for improved carbon capture technology, Progress in Energy and Combustion Science (2012)).

Dr. Rubin emphasized the uncertainty inherent in any cost estimate for a technology that has not yet been built, operated and replicated at commercial scale. As there have been no commercial scale CCS plants built, the true costs are not yet known. However, a number of large-scale demonstration projects for post, pre- and oxy-combustion systems and several types of industrial facilities are planned or underway in the U.S. and several other countries.

There have also been some 50 CCS studies over the past five years that have attempted to address the cost issue; however, there are significant differences in underlying costing methods (as well as key assumptions) that contribute to misunderstanding among various audiences. These studies generally employ two conceptually different methods of estimating future costs – the “bottom up” method using engineering analysis and the “top down” method using learning curves derived from past experience with similar technologies.

Some of the variety in cost estimates reflects the range of technologies selected for the base plant as well as capture, transport and storage options. Most variations arise from differences in methodologies and assumptions for underlying economic parameters. Furthermore, some studies do not include all cost elements for establishing a new greenfield power plant with CCS or CCUS whilst others are less than transparent regarding key assumptions.

Currently, post- and pre-combustion capture technologies are commercial and widely used for gas stream purification in a variety of industrial processes. CO2 is also captured from the flue gases of several small-scale power plant installations (for commodity CO2), but has not yet been demonstrated at full-scale for coal or gas-powered power plants. Oxy-combustion capture is still under development and is not yet commercial, but is advancing rapidly as an option for power plant CO2 capture.

While all three approaches are capable of high CO2 capture efficiencies (~ 90 percent), the major drawback of current capture processes is their high cost per unit of power produced. Roughly 15% to 30% more energy is needed per net kWh for the capture process at new fossil fuel plants. Post combustion CO2 capture incurs higher energy penalties and additional costs than at gasification-based plants. Retrofits of CO2 capture systems to existing power plants also tend to be more costly on a per kilowatt-hour basis than capture at new plants, in large part because the low plant efficiency typical of existing units results in a large reduction in net power output.

Substantial R&D activities are underway in the U.S. under the DOE and worldwide to develop improved solvents for post-combustion capture, as well as potential “breakthrough technologies” such as novel solvents, sorbents, membranes and oxyfuel systems that hold promise for lower-cost capture technology. Most of these processes are still in the early R&D stages and credible estimates of their performance and cost are lacking. The pace and direction of innovations in CO2 capture technology will be strongly influenced by energy and climate policy, which is critical for establishing markets for CCUS technologies beyond CO2 EOR.

The Atlantic Council hosted a discussion on CCUS to explore CO2 EOR potential and market developments with ARI’s Vello Kuuskraa and Michael Moore of the North American Carbon Capture and Storage Association. The briefing was held on July 26, at 3:00 p.m.