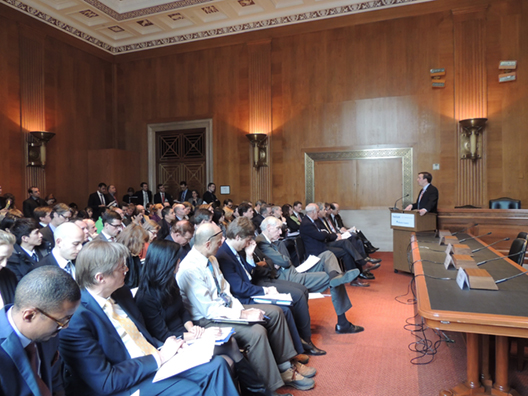 The United States and the European Union cannot afford to follow separate paths on financial reform, according to Senator Christopher Murphy (D-CT), EU Ambassador to the US João Vale de Almeida, and a number of leading experts from the Department of the Treasury, the SEC, the European Commission, the private sector, and academia.  Following the launch of the Atlantic Council’s new report entitled, “The Danger of Divergence: Transatlantic Financial Reform and the G20 Agenda,” financial sector regulators and leading market participants from across Europe and the United States gathered on Capitol Hill to discuss possible paths forward for ensuring the future efficiency and stability of the transatlantic financial market.

The discussion among the experts noted that divergences in derivatives markets, accounting standards, and bank recapitalization are among several key issues plaguing the fluidity of the transatlantic financial market, and that an agreement on mutual recognition standards could be one possible way forward for the two economies to reconcile their differences in financial services oversight. However, several opponents have cited a mutual recognition agreement as a possible means to water down the US’ landmark Dodd-Frank Wall Street Reform legislation. Still, “reciprocity and mutual recognition of cross-border resolution mechanisms isn’t a back-door attempt at diluting our laws. Rather, it’s a good-faith effort to ensure that both the letter and the spirit of those laws are respected,” Senator Murphy countered.

Although the discussants all recognized that not enough has been done since the crises of 2008 and 2009 to shore up divergences among the EU and the US, many of the panelists acknowledged the growing cooperation between the two economies to bridge gaps in their regulatory architectures—as well as just how far the two sides have come since the crisis. Ambassador Vale de Almeida called for a “framework for enhanced cooperation between regulators,” on either side of the Atlantic. Yet, the idea of a mutual recognition framework floated by several discussants was met with a list concerns voiced from both sides. “The EU is understandably concerned with the US implementation and track record on accounting standards, and the US is understandably concerned with uniformity across 28 EU states,” stated Elizabeth McCaul of Promontory Group.

Ambassador Vale de Almeida, Professor Howell Jackson of Harvard Law School, and several other discussants called for financial services to be included in the future negotiations of the Transatlantic Trade and Investment Partnership (TTIP). “Since the crisis, regulation of financial markets has been vastly improved both in the EU and the US. It is time we also upgrade the way we cooperate on a day-to-day basis. TTIP is the right path to do this. We share the same objectives: sound and resilient financial markets supporting the sustainable growth of our economies. We should be able to work in a more effective way,” emphasized Ambassador Vale de Almeida. TTIP is gaining momentum on both sides of the Atlantic, and could possibly prove to offer the strongest and most viable channel for transatlantic regulatory cooperation in the future. “TTIP efforts are the most important bilateral item on the agenda, therefore, it is only natural for it to address finance, given the importance of the sector on both sides,” underlined François Rivasseau, the Deputy Ambassador of the EU to the US.

TTIP would be the largest free trade and investment agreement in history, encompassing nearly half of the world’s economy.Given that over two-thirds of global financial transactions take place between the EU and the US, experts agreed that a sound and robust agreement on financial regulation between the two economies would demonstrate an important step for the stability and soundness of the global economy.