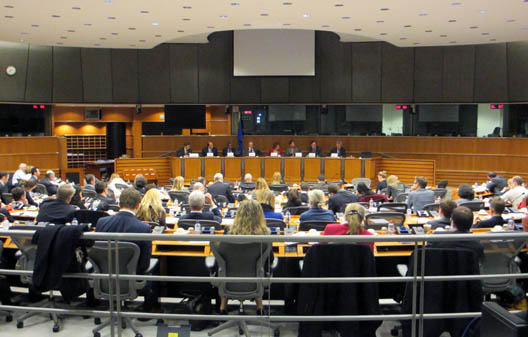 The United States and the European Union must consider not only the transatlantic but the global market if their joint financial reform efforts are to succeed, argued experts from the European Commission, the private sector, the media, and academia at a Brussels event cosponsored by the Atlantic Council, Thomson Reuters, and TheCityUK. The February 12th, 2014, gathering of leading experts from both sides of the Atlantic and Asia explored the danger of future transatlantic divergence in the financial market as well as the rising impact of the Asian market on the global stage. The event followed the earlier launch of The Danger of Divergence: Transatlantic Financial Reform and the G20 Agenda in Washington DC on January 28th, 2014.

Chief Executive Officer of the Hong Kong Securities and Futures Commission Ashley Alder, Chair of the European Parliament’s Economic and Monetary Affairs Committee Sharon Bowles, and other discussants stressed the importance of the Asian markets for future market calculations. Alder warned to keep in mind that “even if the European Union and the United States act in complete union, it is not guaranteed that they will continue to lead the global market because it does not mean that their policy preferences can be exported.” The transatlantic set of preferences differ considerably from that of the Asian market, which “continues to focus on its underdeveloped capital market, problems with SME funding, a general lending gap and infrastructure,” said Alder. Although Executive Director of European Securities and Markets Authority Verena Ross agreed on the importance of international agenda setters, she questioned how detailed convergence can become if one is trying to set common global rules.

Bowles reminded the auditorium that “you cannot take politics out of the equation,” recalling that it was mostly politicians who lost their jobs in the previous crisis, not regulators or even bankers. Many speakers confirmed that up to date there still exists the problem of involving sufficient political interest in the cause. All discussants recognized that greater involvement, dialogue, and early engagement will be the key to ensure future consistency and mutual compliance. However, the head of unit in financial services policy for the European Commission Martin Merlin noted that trade agreements are not popular on either side of the Atlantic because the public fears a leveling down of standards. He ensured that the Europeans “love Dodd-Frank [Wall Street Reform and Consumer Protection Act]” and stressed the need to convey to the public that substance will be dealt with outside of Transatlantic Trade and Investment Partnership (TTIP). In that light, Karel Lannoo, chief executive officer of the Centre for European Policy Studies, mentioned some major improvements in accountability and transparency, referring to a joint statement on TTIP by US President Barack Obama, European Council President Herman Van Rompuy and European Commission President José Manuel Barroso of February 13th, 2014.

All discussants emphasized that although the report focuses on the remaining divergences between the two markets, considerable steps have been taken to improve cooperation, and several speakers reminded the audience that the problems addressed in the report represent the very few issues on which the US and the EU diverge concerning TTIP. Lannoo and several other discussants see the inevitable need for the TTIP as the “political umbrella” for a real transatlantic solution, as “it is impossible to imagine a solution which ignores the sector of finance as it is a critical tool to aid trade and investment.”

Although the panel agreed with Christopher Perry, Global Managing Director, Risk Segment at Thomson Reuters, that the TTIP is “an enabler not a problem creator,” the discussion has disclosed that the transatlantic regulatory alliance is no longer the only game in town. HSBC has estimated that by 2050, the seven largest emerging markets could be twice as large as the Group of Seven (G7). This only underlines the importance of TTIP as closer transatlantic coordination will be vital if the European and American regulators wish to take a lead in a coherent regulatory framework for the international financial system.