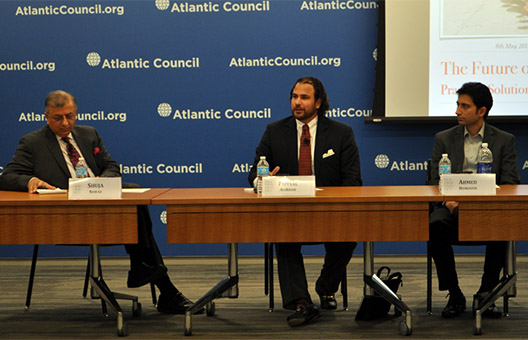 “FATA (Federally Administered Tribal Areas in Pakistan) is often portrayed as an incubator of terror and violence that threatens the entire stability of the region,” stated Faiysal AliKhan speaking at a South Asia Center event on May 8, but a danger exists in discussing a single solution for the region as a whole, given the diverse and complex nature of the region.

“Pakistan is not a failed state…but it is a weak state,” stated Humayun. The principle source of weakness is the Taliban, which operate out of the remote tribal regions in the Northwest but in recent years have spread their destabilizing impact and operations throughout the country. Contrary to images of cave dwellers with guns chanting angry words, Humayun argued the Taliban have “access to a vast infrastructure of extremism” with a variety of components, including recruiters, propaganda makers and disseminators, training camps, financiers, etc. “This infrastructure is local…regional and global, and until and unless that infrastructure is dismantled, and until and unless the logic of that infrastructure is not combatted, they will continue to flourish.”

AliKhan further stressed, removing anti-state actors from the region must occur alongside the building of order and a writ of state in FATA. Longstanding complexities surrounding law and order, justice, and access issues have challenged modern-day governance structures and mindsets in FATA. The colonial government in FATA during British rule sought “exclusion, containment, and economic dependence” creating subjects rather than citizens. AliKhan highlighted key areas to reclaim law and order in FATA through police reforms, including police forces in each tribal agency, and more unified command. In addressing access issues, AliKhan suggested reducing bureaucracy by localizing to each agency, and building development authorizes in each agency to incorporate youth in the development of the region.

However, both speakers urged integrated approaches that consider the interconnectedness of Pakistan’s provinces and problems. A “tendency of geographic myopia” is occurring in Pakistan, said Humayun, in which issues facing the country as a whole are tied to regions and addressed in isolation. “There has to be a focus on what as a whole will bring peace to the polity.”