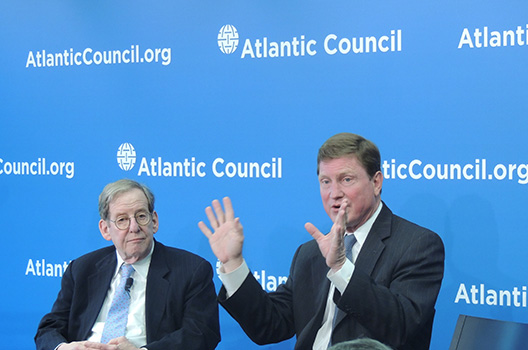 The Atlantic Council’s Global Energy Center hosted Thomas Fanning on March 10th, 2015 for a discussion on how innovation and new energy technologies will affect electric utilities.

The discussion began with Fanning—the first speaker in the Center’s CEO Series: The Future of the Power Industry in an Era of New Technologies—explaining that for the first time in decades, the United States has the ability to pursue energy policies based on abundance rather than scarcity.

Fanning, CEO of Atlanta-based Southern Co., said Americans should view themselves as global citizens, noting that promoting energy security for the world “will in turn breed national security, which breeds economic security.” He suggested three ways of reaching this goal: “Take advantage of our full resources (gas, coal, nuclear, etc.), promote energy innovation, and enact fiscal policies around the world that need to be present to promote electric infrastructure and markets.”

Energy security cannot be stagnant and must take consumer trends into account, he said. Delivering what customers want rather than fighting their demands promotes fiscal growth, allowing money to be reinvested in creating more efficient methods and sources of power.

The utility executive said that given their lack of infrastructure, developing countries have the chance to create an efficient electric grid. African nations in particular have vast potential to exploit their renewable resources, he said. In addition, nuclear power and refined coal extraction techniques could fuel these countries’ extensive infrastructure needs.

Fanning also outlined his recommendations for future US energy policy and criticized the decommissioning of nuclear power plants in Europe following Japan’s Fukushima Daiichi disaster in 2011. In fact, he said, nuclear technology is becoming safer and more efficient. He suggested that European nations promote an integrated, regulated market structure and establish a carbon market.