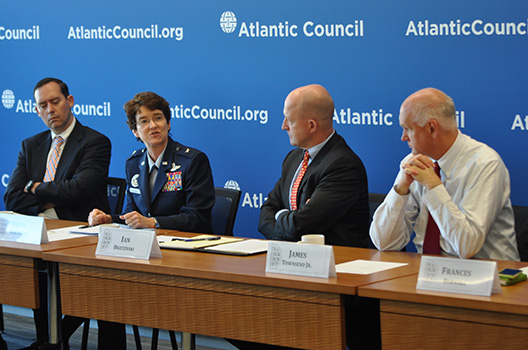 On October 17, Deputy Assistant Secretary of Defense for European and NATO Policy James J. Townsend, Jr. and Brigadier General Jackie Van Ovost met with members of the transatlantic defense community to discuss US security commitments to Europe and the capability of NATO Allies to handle increasingly-complex international security issues with a limited resources and outmoded defense establishments.

The crisis in Ukraine has highlighted the need for NATO to adapt. Simultaneously, it has become imperative that the United States reaffirm its commitment to the defense of its European allies. NATO’s Readiness Action Plan (RAP) and the United States’ European Reassurance Initiative (ERI) are integral components of the West’s response to Russia’s actions in Eastern Europe.

On a grander scale, many transatlantic leaders see RAP as a bridge between the NATO of today and a modern, responsive NATO of tomorrow. Additionally, allies’ pledges to increase defense spending at the NATO Wales Summit in September 2014 were seen as genuine guarantees of renewed and bolstered commitment to the transatlantic partnership. Some of the institutional challenges regarding multilayered cooperation between leadership in NATO, the European Union, and national governments were highlighted, but transatlantic policymakers expect a renewed impetus to collaborate, coupled with reforms like the RAP to overcome such complications. American, European, and Russian military capabilities were touched upon as well.

While Russia may have surprised some with the level of sophistication it displayed in its operations in in Crimea, it is more important to pay attention to the long-term sustainability and viability of Russia’s military forces when formulating an appropriate NATO response to Putin’s actions. Policymakers must take a realistic assessment of the numerous contemporary security challenges facing the Alliance into consideration in order for NATO to reform and remain relevant.