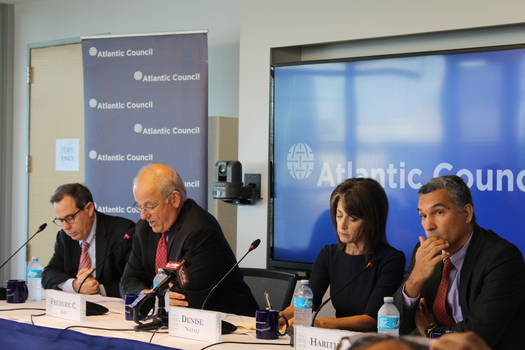 On October 10, 2017, the Rafik Hariri Center for the Middle East held a panel discussion on the recent Kurdish referendum and the state of Iraqi-Kurdish relations. Ambassador Frederic C. Hof, the director of the Hariri center, moderated the event. Ambassador Stuart Jones, Dr. Harith Hasan, and Dr. Denise Natali contributed to the discussion as panelists. Ambassador Jones is currently the vice president of The Cohen Group and has extensive experience with Iraqi affairs from his former career at the US Department of States. Dr. Hasan, a nonresident senior fellow at the Hariri Center, previously a lecturer at Baghdad University and was a member of the Atlantic Council’s Task Force on the Future of Iraq chaired by Ambassador Ryan Crocker. Dr. Natali is the director of the Center for Strategic Research at the Institute for National Strategic Studies (INSS) and is an expert on the Kurdish regions of Iraq.

During the discussion, each of the panel participants highlighted different issues regarding the Kurdish crisis. Dr. Hasan began by examining the various motivating factors behind the Kurdish push for independence. He pointed out the ineffective, oil-dependent Iraqi government institutions, the prevalence of de facto politics over constitutional politics, and the continual failure of the Iraqi central government and the Kurdistan Regional Government (KRG) to agree on borders and oil resources. Furthermore, Dr. Hasan discussed how Sunni Muslims share some of the grievances of the Kurds and noted that the Kurdish situation serves as both a challenge and opportunity for Iraqi Prime Minister Haider al-Abadi.

Dr. Natali emphasized that the road to Kurdish independence is not a “one way street” and was influenced by many complex variables. She noted that although the leadership such as Prime Minister al-Abadi and KRG President Masoud Barzani will attempt to be rational in negotiations, some of the militias and other groups present in Iraq may try to take advantage of this sensitive situation. Furthermore, Dr. Natali emphasized the complex nature of the situation, pointing out the numerous other countries, such as Iran and Turkey, involved in the conflict and the many differences that exist within the KRG and other Kurdish groups.

Ambassador Jones touched on the inevitability of the referendum and the role that the United States should play going forward in the Kurdish crisis. In particular, he recommended that, for the time being, the United States continue to adopt a policy of “wait and see,” allowing things to play out on the ground as long as conflict is not imminent. Additionally, Ambassador Jones mentioned the moderate, restrained position that Prime Minister al-Abadi has taken toward the conflict and the role that he has played in developing ties separate from Iran. Ambassador Jones closed by voicing hope for the development of a positive atmosphere of negotiation in Iraq that prevents violence and conflict.